A new study reveals that bacterial cells can contain internal compartments, indicating that the single-celled organisms are more complex than previously thought. The finding by researchers from Princeton University and colleagues in Germany was published in the Dec. 7 issue of Cell. 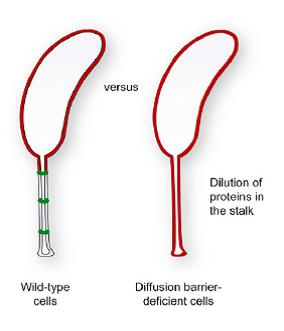 The researchers discovered the compartments in certain crescent-shaped bacteria, which normally live in freshwater streams and lakes. When the organism -- known as Caulobacter crescentus -- is ready to settle down and reproduce, it grows a stalk to attach itself to a rock at the bottom. The researchers discovered barriers that prevent cellular ingredients from moving freely between the stalk and cell body.

"In more complex organisms, we are accustomed to finding membrane-bound compartments such as the nucleus, where DNA is stored," said Zemer Gitai, associate professor of molecular biology and leader of the Princeton team, which identified the presence of the barriers. "We've shown that these bacteria have some of the same characteristics as more complex organisms."

The compartments could provide a growth advantage by allowing the bacteria to make only the proteins that are needed in the cell body, without having those proteins float down into the stalk where they are not needed, Gitai said.

Gitai's team at Princeton included Eric Klein, a postdoctoral researcher in the department of molecular biology at Princeton. The Princeton researchers worked with scientists from Germany, led by Martin Thanbichler at the LOEWE Center for Synthetic Microbiology, and others at the Max Planck Institute for Terrestrial Microbiology.

The Princeton investigators visualized the barriers by marking the proteins inside the cell body and stalk with fluorescent tags that give off a red color when exposed to green light. When the light is very intense, the tags lose the ability to give off the red color, a phenomenon called “bleaching.” 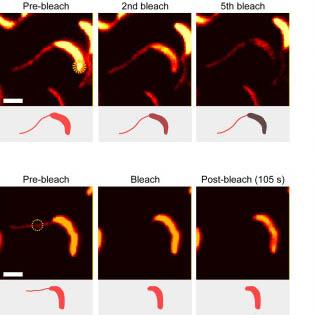 Meanwhile, in Germany, Susan Schlimpert of the Max Planck Institute was investigating the nature of proteins found in the stalk. Schlimpert and her colleagues looked for genes that were active when the stalk was growing, and identified four types of proteins that they named “Stalk proteins A, B, C, and D.” When the researchers inactivated the genes that code for these stalk proteins, the barrier did not form.

The researchers do not know how many types of bacteria contain similar protein-mediated structures, but such barriers do occur in other types of cells that contain both a main body and a long thin projection. For example, the cells that line the human gastrointestinal tract have a cell body and long thin projections called cilia, each of which contains a protein barrier at the base.