The detection of an elusive solar neutrino by the Borexino experiment in Italy has been named one of Physics World magazine’s top ten Breakthroughs of the Year for 2014. 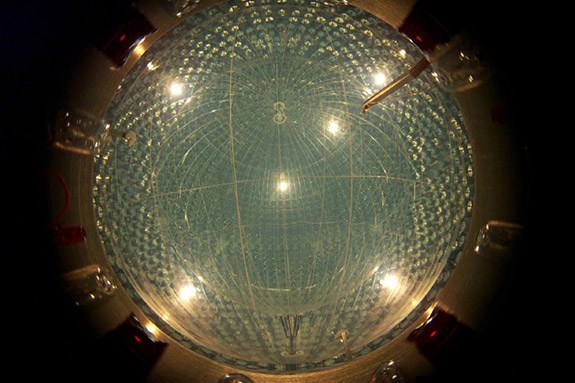 The international team announced the detection of the proton-proton neutrino, which is emitted during the first of several fusion reactions that generate 99 percent of the sun’s energy, in an August 28 article in the journal Nature. Princeton researchers, led by Professor of Physics Frank Calaprice, have been involved for the last 25 years in making Borexino one of the most sensitive neutrino detectors in the world.

In addition to Calaprice, Princeton researchers include Professor of Physics Cristiano Galbiati, Professor of Chemical and Biological Engineering Jay Benziger, former graduate student Laura Cadonati, who is now an associate professor of physics at the University of Massachusetts-Amherst, and former graduate student Andrea Pocar, who is now an assistant professor at the University of Massachusetts-Amherst. The project also involved engineer Allan Nelson, Borexino general engineers Augusto Goretti and Andrea Ianni; Alvaro Chavarria, who earned his doctorate in physics in 2012; Pablo Mosteiro, who earned his doctorate in physics in 2014; Richard Saldanha, who earned his doctorate in physics in 2012; R. Bruce Vogelaar, a former assistant professor who is now at Virginia Polytechnic Institute and State University; Alex Wright, a former postdoctoral researcher who is now assistant professor at Queen's University; and additional engineers, technicians, and graduate and undergraduate students.