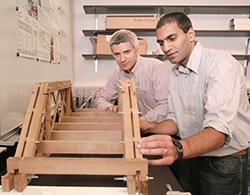 The 2007 collapse of the Interstate Highway 35W bridge over the Mississippi River in Minneapolis spurred Princeton engineers Branko Glišić and Naveem Verma to develop a low-cost yet accurate sensor system for detecting defects in such massive structures.  Embedded in customizable plastic sheets, the sensors can differentiate between a minor and major structural problem, and feature integrated circuits that allow communication with other sensors in a bridge.  Glišić, an assistant professor of civil and environmental engineering, and Verma, an assistant professor of electrical engineering, worked with Princeton’s James Sturm, the William and Edna Macaleer Professor of Engineering and Applied Science, and Professor of Electrical Engineering Sigurd Wagner.

Traditional sensors measure defects at a single point, rather than across a large area, and data must be transmitted to computers and evaluated using complex algorithms and expensive technology.  The Princeton sensors are made from inexpensive thin-film circuit technology that can be “stamped” on large, flexible plastic sheets at a cost far lower than manufacturing conventional electronics. The plastic sheets can then be molded into the shape of a structure allowing comprehensive coverage, or cut to fit irregular forms, both without hindering their function.

An additional advantage of Glišić and Verma’s sensors is that their integrated circuits communicate with each other, even double-checking data to differentiate between false alarms or minor structural issues, versus real problems that require immediate repair.

“This system will allow funds and time to be used to their best advantage,” Glišić said.  “If workers are sent for repairs too early, it wastes money.  But send them too late, and you have a disaster.