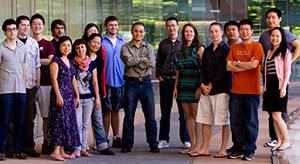 Invasive breast cancer strikes 1 in 8 women and causes roughly 40,000 deaths each year in the United States. About 20 percent of women with breast cancer go on to develop tumors that spread throughout body, are resistant to chemotherapy, and are often fatal.

The research team of Yibin Kang, the Warner-Lambert/ Parke-Davis Professor of Molecular Biology, has discovered that a gene called Metadherin (MTDH) can act as a diagnostic marker and a therapeutic target for aggressive breast cancer. Metadherin gene overexpression is found in more than 40 percent of breast tumors and has been linked to poor survival rates. The gene is associated with about 20 cancer types, indicating that a MTDH-blocking strategy could overcome a variety of cancers.

A study published earlier this year by the Kang group revealed that although the gene appears to be essential for tumor growth, it is dispensable for normal development, indicating that medications that target this gene will potentially have a good safety profile.

The team also found that MTDH is involved in tumor initiation as well as metastasis, and that it promotes tumor growth through an interaction with another molecule known as SND1, believed to help tumor cells survive stressful conditions. The researchers found that MTDH uses two molecular fingers that stick into two pockets on the surface of SND1 — similar to how a person holds a bowling ball, Kang said. The study was published in the journal Cancer Cell in June 2014.

The team is currently screening small molecules that could block the “holes” in SND1 and curtail its tumor-promoting functions. “MTDH stabilizes SND1 and that is the lifeboat for the so-called cancer stem cells that initiate primary tumors and metastasis,” Kang said. “Without MTDH, SND1 will be degraded and the seeds of cancer will be wiped out.”

The lead researcher for the project is 2014 Ph.D. graduate Liling Wan. Key people involved in the technology were: Xin Lu, Salina Yuan, Yong Wei, Minhong Shen, Min Yuan, Rumela Chakrabarti, Heath Smith and Mario Andres Blanco at Princeton, and Feng Guo and Yongna Xing at the University of Wisconsin-Madison. Funding was provided by the U.S. Department of Defense and the National Institutes of Health.