Capping decades of searching, Princeton scientists observe elusive particle that is its own antiparticle

Princeton University scientists have observed an exotic particle that behaves simultaneously like matter and antimatter, a feat of math and engineering that could eventually enable powerful computers based on quantum mechanics.

Using a two-story-tall microscope floating in an ultralow-vibration lab at Princeton's Jadwin Hall, the scientists captured a glowing image of a particle known as a "Majorana fermion" perched at the end of an atomically thin wire — just where it had been predicted to be after decades of study and calculation dating back to the 1930s.

"This is the most direct way of looking for the Majorana fermion since it is expected to emerge at the edge of certain materials," said Ali Yazdani, a professor of physics who led the research team. "If you want to find this particle within a material you have to use such a microscope, which allows you to see where it actually is." 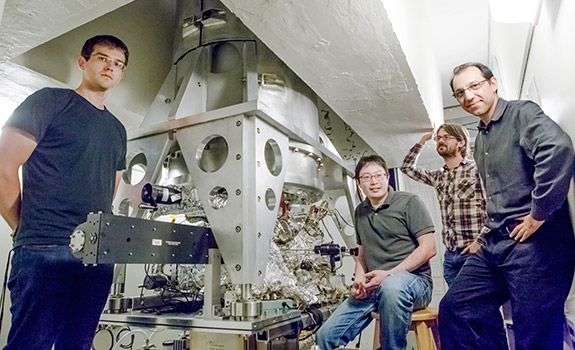 The hunt for the Majorana fermion began in the earliest days of quantum theory when physicists first realized that their equations implied the existence of "antimatter" counterparts to commonly known particles such as electrons. In 1937, Italian physicist Ettore Majorana predicted that a single, stable particle could be both matter and antimatter. Although many forms of antimatter have since been observed, the Majorana combination remained elusive.

In addition to its implications for fundamental physics, the finding offers scientists a potentially major advance in the pursuit of quantum computing. In quantum computing, electrons are coaxed into representing not only the ones and zeroes of conventional computers but also a strange quantum state that is both a one and a zero. This strange property, called quantum superposition, offers the possibility of solving previously incalculable systems, but is notoriously prone to collapsing into conventional behavior due to interactions with nearby material.

Despite combining qualities usually thought to annihilate each other — matter and antimatter — the Majorana fermion is surprisingly stable; rather than being destructive, the conflicting properties render the particle neutral so that it interacts very weakly with its environment. This aloofness has spurred scientists to search for ways to engineer the Majorana into materials, which could provide a much more stable way of encoding quantum information, and thus a new basis for quantum computing.

A team led by Yazdani and including colleagues at Princeton and at the University of Texas-Austin published their results in the Oct. 2 issue of the journal Science.

Yazdani noted that the observation of the Majorana fermion bound within a material is different for physicists than the much publicized discovery of particles, such as the Higgs boson, in a vacuum in giant accelerators. In those experiments, scientists collide particles at high speeds, producing a shower of free and ephemeral components. In materials, by contrast, the existence of a particle depends on — or emerges from — the collective properties of the atoms and forces surrounding it.

By controlling these interactions, the researchers said, their Majoranas appeared "clean and removed from any spurious particles," which would be unavoidable in high-energy accelerator experiments. "This is more exciting and can actually be practically beneficial," Yazdani said, "because it allows scientists to manipulate exotic particles for potential applications, such as quantum computing."

In addition to their potential practical uses, the pursuit of Majoranas has broad implications for other areas of physics. Scientists believe, for example, that another sub-atomic particle called neutrinos, which also interact very weakly and are very hard to detect, could be a type of Majorana — a neutrino and anti-neutrino being the same particle. In addition, scientists regard Majoranas as possible candidates for dark matter, the mysterious substance that is thought to account for most matter in the universe, but which has not been directly observed because it also does not directly interact with other particles. 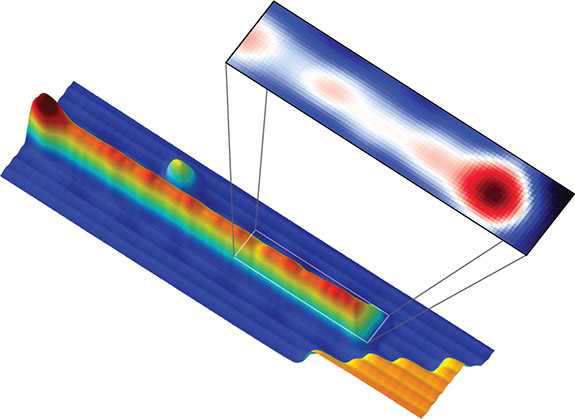 Despite the scientific interest, there was little progress in finding the particle until 2001 when physicist Alexei Kitaev (now a professor at the University of California-Santa Barbara) predicted that, under the correct conditions, a Majorana fermion would appear at each end of a superconducting wire. Superconductivity is the phenomenon that enables a material to carry electricity without any resistance. In Kitaev's prediction, inducing some types of superconductivity would cause the formation of Majoranas. These emergent particles are stable and do not annihilate each other (unless the wire is too short) because they are spatially separated. Importantly, Kitaev also outlined how such a particle could be harnessed as a qubit, the basis of a quantum computer, which added significant impetus to the search.

In 2012, a team of researchers at the Delft University of Technology in the Netherlands may have caught a glimpse of Majorana fermions in an experiment that induced superconductivity in a semiconductor known as indium antimonide. They reported very strong evidence for the electrical signal characteristic of a neutral Majorana in nanoscale wires made of these materials.

Scientists, however, have argued that other phenomena could produce the same signal, and Yazdani and his team sought to find more definitive observation of Majorana fermions by capturing an image of them. In 2013, Yazdani and B. Andrei Bernevig, an associate professor of physics, teamed up to propose a new approach for how the Majorana particle could occur in materials that combine magnetism and superconductivity. They also proposed that such a particle could be directly observed using a device called a scanning-tunneling microscope.

Yazdani and Bernevig received funding to carry out their proposed experiments through the Princeton Center for Complex Materials, an interdisciplinary center on campus funded by the National Science Foundation. Promising results from that work allowed them to partner with the Texas team and win a $3 million grant from the Office of Naval Research under a program called the Majorana Basic Research Challenge.

The setup they created starts with an ultrapure crystal of lead, whose atoms naturally line up in alternating rows that leave atomically thin ridges on the crystal's surface. The researchers then deposited pure iron into one of these ridges to create a wire that is just one atom wide and about three atoms thick. Considering its narrow width, this wire is very long — if it were a pencil it would be five feet from tip to eraser.

The researchers then placed the lead and the embedded iron wire under the scanning-tunneling microscope and cooled the system to -272 degrees Celsius, just a degree above absolute zero. After about two years of painstaking work, they confirmed that superconductivity in the iron wire matched the conditions required for Majorana fermion to be created in their material.

Ultimately, the microscope was also able to detect an electrically neutral signal at the ends of the wires, similar to those seen in the Delft experiment. However, the setup also allowed the researchers to directly visualize how the signal changes along the wire, essentially mapping the quantum probability of finding the Majorana fermion along the wire and pinpointing that it appears at the ends of the wire.

"It shows that this signal lives only at the edge," Yazdani said. "That is the key signature. If you don't have that, then this signal can exist for many other reasons."

Yazdani noted that although the experimental setup used to measure and demonstrate the existence of Majorana particle is very complex, the new approach does not use exotic materials and is straightforward for other scientists to reproduce and use.

"What's very exciting is that it is very simple: it is lead and iron," he said.

In fact, in the course of their experiments the researchers found that their approach is even easier to use than they expected. While they set out to fine-tune the properties of their materials to exact specifications, they found that their system is almost guaranteed to have Majorana fermions, as long as some general features of magnetism and superconductivity are in place.

Most of the previous thinking about generating Majoranas had focused on using relatively exotic forms of magnetism, the researchers said. "We realized that Majoranas could be present even in the common form of magnetism found in iron," said Allan MacDonald, a physicist who led the Austin team.

Bernevig added, "As long as you have a strong magnetic material — like iron but it could be other magnets — in which electrons are magnetically polarized (or electrons feel a very strong magnetic field), the possible range of parameters in which Majoranas appear increases dramatically."

"Once you have that, all you need are some relativistic effects that are easy to induce at the surface of a heavy element like lead, and the Majoranas will appear," Bernevig said. "We expect many more materials will produce these elusive particles."

In fact, MacDonald added, "Iron and lead are almost certainly not the optimal materials. We expect to be able to identify materials in which Majoranas are even more stable."

In addition to Yazdani, Bernevig and MacDonald, authors of the work are graduate student Ilya Drozdov and postdoctoral researchers Stevan Nadj-Perge, Jian Li, Sangjun Jeon and Jungpil Seo of Princeton, and Hua Chen of the University of Texas.