Cecilia Elena Rouse, dean of the Woodrow Wilson School, on unemployment in the U.S.

The recent jobs report – which boasts 321,000 new jobs added in November – is certainly good news. But, as with many monthly reports driven by data, the results are a bit more nuanced. 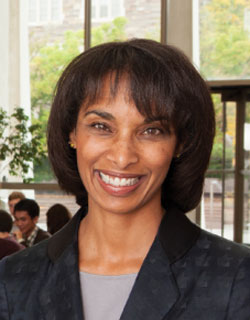 Q. The recent jobs report shows that 321,000 new jobs were added in November — nearly 100,000 more than economists were predicting. What caused the jump?

Rouse: The strong employment number this month is consistent with other recent economic data suggesting the economy continues to strengthen. For example, not only were the September and October employment figures revised upwards, but so was the second estimate of the Gross Domestic Product (GDP) growth in the third quarter. The increased economic activity (as reflected in GDP) underlies last month’s employment growth.

Q. How excited should we be about the numbers? It seems we still have far to go in terms of reaching pre-recession economic status.

Rouse: We should certainly be encouraged by the recent data, but it is also important to keep in mind that there can be considerable variability from month to month such that we should not read too much into any one report. Further, nearly one-third of those who were considered unemployed have been without work for more than six months, which remains high by historical records. Also, about 11 percent are unemployed using a broader measure which includes those who are employed part-time but would prefer to work full-time and those who are no longer working for look because they have become discouraged. Finally, while wages appear to have increased a bit in November, there is still a long way to go before most workers will feel that their standard of living has significantly improved.

Q. What can we glean from these numbers in terms of the overall state of the economy?

These numbers suggest that the economy continues on a path of recovery. Importantly, the report suggests job growth in a number of industries such as manufacturing, construction, wholesale trade and transportation which have traditionally also been associated with higher wages.

Q. The unemployment rate remained steady at 5.8 percent. With these new jobs added, can we expect to see that number change in the next quarter?

So, one phenomenon that can happen as the economy strengthens is the unemployment rate actually increases as job growth also increases. The reason is that not only are more people employed with the increase in job growth, but more people who may have been discouraged start looking for work as well. Typically, this is a temporary increase in the unemployment rate as economic activity picks up. But it does mean that it can be hard to predict the future level of unemployment during periods of economic recovery.