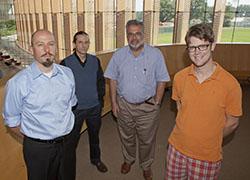 David Botstein, the Anthony B. Evnin ’62 Professor of Genomics, and his research team have developed a new system to activate single genes, making it easier for researchers to identify the function of individual genes and explore how genes work together.

Although scientists can detect when gene expression is related, their causal relationship is often unclear, said Botstein, director of Princeton’s Lewis-Sigler Institute for Integrative Genomics. By turning on just one gene, however, a researcher can observe which gene affects the other, he said. Botstein and his team from the Lewis-Sigler Institute, which includes associate research scholar Marcus Noyes, research lab manager Sanford Silverman, and graduate student R. Scott McIsaac, also developed a technology that can degrade, or "turn off," a single resultant protein. The researchers’ work was done in yeast, but both techniques should work in any living organism.

Both techniques could be used to help uncover fundamental gene regulatory systems, Botstein said. Another application is high-throughput screening of drug candidates for effects on gene expression. This technology also could have applications in bioengineering microorganisms to produce biofuels or biological therapeutics. Turning on specific genes at certain times would allow scientists to control the production of biofuels or other products, Botstein said. The team also hopes that their research will lead to the development of a mathematical model for predicting the outcome of turning off various genes.