A Device for Studying the Developing Lung 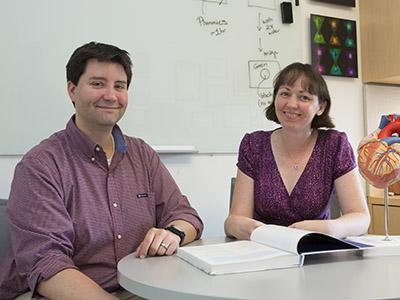 A third of all babies in the neonatal intensive care unit have lung problems. Of those, many suffer from abnormal lung development, a usually permanent condition that leads to respiratory ailments and can be fatal.

Celeste Nelson, an associate professor in the Department of Chemical and Biological Engineering, and her team are studying the development of the lungs during gestation to find out what goes wrong during formation of the 300 million or so tubular branches known as bronchioles that supply air after birth.

“These abnormalities can be diagnosed via ultrasound about halfway through gestation,” Nelson said, “yet we have no way of treating these conditions.” Instead, these babies are born with fewer branches and with damaged alveoli, which are the tiny balloon-like sacks at the end of each branch where the exchange of oxygen takes place.

To make studies of such tiny structures possible, Nelson and postdoctoral researcher Jason Gleghorn have developed a miniature device for studying the lungs of mice. The project is funded by the National Heart, Lung and Blood Institute and the Burroughs Welcome Fund.

“Our device is meant to mimic the chest cavity of a developing baby — scaled to the size of a developing mouse,” Nelson said. “It allows us to see what happens when we change the pressure of the fluid inside and around the lungs.” Such pressure changes can happen when the developing fetus has a hernia — or hole — in the diaphragm, allowing fluid to enter the region and compress the lungs. When this happens, the bronchioles fail to branch properly.

The device allows researchers to study the living lung, observe the branching of the bronchioles, and capture images and other data over a period of 60 hours. It consists of two tiny fluid-filled chambers, one in which a mouse lung is placed, and another that allows access to the airways of the lung. The design allows researchers to maintain or change the pressure of the fluid in which the developing lung grows while measuring the mechanical properties of the lung tissue.

These studies, combined with molecular and genetic tools, could suggest potential ways to develop therapeutics for the treatment of fetal lung malformations and another branched organ, the kidney. “Once we understand the process, it will be possible to develop treatments to prevent these abnormalities,” Nelson said.