Science deans and educators from New Jersey's universities and colleges came to Princeton University Monday, Nov. 14, to meet with each other and with business and government leaders to discuss ways to revive the state's economy and create jobs through programs in science, technology, engineering and math. 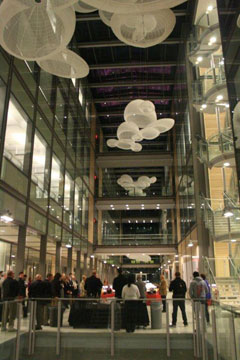 Held in Frick Chemistry Laboratory, which opened last year, the event featured tours led by graduate students of the teaching laboratories and research facilities, as well as the building's energy-saving features. Construction of the building was funded through royalties the University earned from the cancer drug Alimta, a drug based on a molecule discovered by Princeton chemistry professor Edward Taylor and subsequently developed through collaboration with the pharmaceutical firm, Eli Lilly & Co.

"This building is a poster child for the kind of successful collaborations that are possible between universities and companies," said Taylor, the A. Barton Hepburn Professor of Organic Chemistry Emeritus. "I offer this as an example of what is possible."

In welcoming the group, Princeton Dean for Research A. J. Stewart Smith, the Class of 1909 Professor of Physics, said, "University-industry partnerships are essential to innovation, and Princeton is delighted to host events like this that bring the very people together who are most likely to form exciting and fruitful collaborations."

Princeton researchers and faculty have partnerships with many New Jersey-based companies, including ExxonMobile Research and Engineering Company in Annandale; Lockheed Martin Advanced Technology Laboratories in Cherry Hill; and SES Engineering, a satellite telecommunications provider with U.S. headquarters in Princeton.

To foster collaborations, Einstein's Alley is planning a number of similar meetings at institutions of higher education around the state, said Katherine Kish, its executive director. "New Jersey has so many assets that people are unaware of, including educational facilities and programs focused on science and technology," Kish said. She noted that while North Carolina has its Research Triangle and California has Silicon Valley, New Jersey has Einstein's Alley as its technology corridor.

Dori Vicente, an associate professor in the Department of Engineering/Technology/Architecture at Union County College, said she was drawn to the event because she wants to inspire her students to stay engaged in math and science. "Our students have to see that a bright future is out there," she said.

Another educator saw the event as a way to build relationships with other universities. "One of the things that many people are frustrated by is that the state is siloed in terms of industries and educational resources," said Michael Palladino, dean of the School of Science and an associate professor in the Department of Biology at Monmouth University in West Long Branch.

Princeton has a long history of partnering with other institutions around the state, according to the University's Office of Research and Project Administration. Faculty members are active in collaborations with researchers at Rutgers University, the University of Medicine and Dentistry of New Jersey, and the New Jersey Institute of Technology.

While these collaborations are essential, partnerships between businesses and universities also are essential and beneficial to both parties, because companies seek an educated work force and students want to gain experience, said Parviz Ansari, dean of the College of Liberal Arts and Sciences at Rowan University in Glassboro. "Finding ways to identify collaborative partners in science, technology, engineering and mathematics is extremely important for our students, especially those from groups that are traditionally underrepresented in those fields," Ansari said.

The event served as an opportunity to highlight the contributions of universities and colleges to the state's economy, from producing scientists who work in New Jersey's pharmaceutical and engineering companies to creating spin-off companies based on faculty or student research.

The state administration continues to be an active supporter of technology transfer, said Elizabeth Mackay, senior policy adviser in the N.J. Department of State. "This administration recognizes the important role of government, institutions of higher education and businesses on the continued growth of our state economy."

Technology transfer from the laboratory to industry is beneficial to society and the economy, noted Dean Smith. According to Princeton's Office of Technology Licensing, Princeton discoveries are in development at several New Jersey start-up and spin-off companies, including by Universal Display Corporation of Ewing, Signum Biosciences and Nanonex, both in Monmouth Junction, and Generation Biotech in Lawrenceville.