A new initiative to encourage bold and creative research at Princeton University is poised to bear fruit: The first annual Dean for Research Innovation Funds have been awarded to a group of projects that push the boundaries of research in the natural sciences. 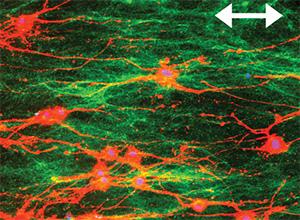 Injuries to the spinal cord and other parts of the nervous system can be impossible or difficult to repair because new nerve cells have difficulty traversing the damaged or scarred region. Professor of Molecular Biology Jean Schwarzbauer and Professor of Chemistry Jeffrey Schwartz have been awarded $188,000 to develop an implantable "bridge" over which new neurons can grow.

Current treatments for nerve injury involve surgical grafts or the insertion of a small tube through which neurons may bypass the damaged region. "The issue with spinal cord injuries is that nerve cells can only grow back over short distances, and grafts are not always successful," Schwarzbauer said. "The tubes also have problems, because if the tube is too narrow, cells cannot access nutrients and they die."

The "neuron bridge" is open to the cellular environment so it could promote new neuron growth without restricting nutrients. The bridge is patterned with parallel stripes — made through surface-modification chemistry — that encourage support cells to grow toward the other side of the damaged region. As the cells grow, they assemble a supportive scaffold known as extracellular matrix, providing a cable-like structure that spans the injury site on which new neurons can grow and make connections with other neurons.

"Just as lane-lines on a bridge keep cars moving parallel to one another, these stripes keep the cells growing in alignment," said Schwartz. "The bridge might enable a process that is similar to the natural progression of nerve repair."

A total system for studying the brain and behavior 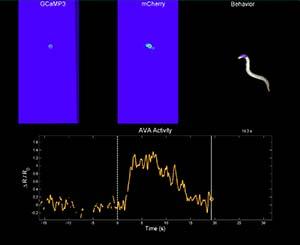 Scientists have much to learn about how the brain takes in information, processes it and directs the body to respond. To develop a system for studying these steps in a living organism, Joshua Shaevitz, an associate professor of physics and the Lewis-Sigler Institute for Integrative Genomics, and Andrew Leifer, a Lewis-Sigler Fellow, will receive $200,000 over two years.

The researchers will develop an all-in-one system for studying how neuronal activity dictates behavioral responses in the roundworm Caenorhabditis elegans, whose brain contains about 150 neurons rather than the millions found in larger animals.

"The system will allow us to figure out what all the neurons in the brain do while the worm is wiggling around and doing its thing," Shaevitz said. "This will enable us to answer questions about how perturbations to its neurons influence the behavior of networks of neurons and translate to behaviors."

Shaevitz and Leifer will build a prototype consisting of multiple cameras and light sources mounted above the worms as they move. Blue light will stimulate activity of targeted neurons while the cameras capture the activity of all of the neurons in the brain and simultaneously track the worms' movement. A computer program will combine the input and imaging data to decipher how the neuronal activity leads to behaviors. 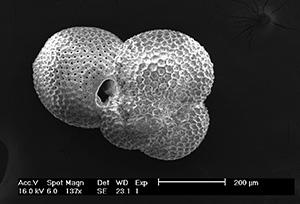 To reconstruct the carbon dioxide levels of the distant past, Daniel Sigman, the Dusenbury Professor of Geological and Geophysical Sciences, has received $193,000 over two years to measure the carbon trapped in the fossils of phytoplankton shells.

Trapped in the shell wall, the fossil-bound organic matter is protected from biological decomposition and chemical alteration, preserving it for millions of years. A method for extracting minute quantities of organic matter has already been developed at Princeton and applied to nitrogen, and Sigman is confident that the technique can be applied to carbon-based compounds.