Under a new $3 million grant from the Glenn Foundation for Medical Research, Princeton University researchers will study the biology of aging and healthspan.

The grant will establish the Paul F. Glenn Laboratories for Aging Research at Princeton under the leadership of Coleen Murphy, associate professor of molecular biology and the Lewis-Sigler Institute for Integrative Genomics. The funding will support pioneering collaborative work by faculty members in neuroscience, computer science, computational biology, physics and mathematics on the biological mechanisms that control the aging process. 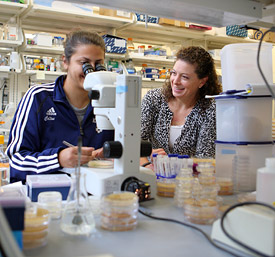 Murphy uses the roundworm Caenorhabditis elegans, an organism that shares many signs of aging with humans, including cognitive decline. The worms have a mere 302 neurons, far fewer than the billions of neurons found in the human brain, yet the way they function is remarkably similar.

C. elegans is a soil-dwelling worm with a keen sense of smell. Murphy's team trains the worms to associate certain odors with food, in this case bacteria, and then observes how their ability to learn and to remember declines with age. This happens quickly, as the entire lifespan of C. elegans is only a few weeks long. The researchers are identifying which genes are activated with memory training when the worms remember the smells they associate with food, and which genes change with loss of this ability. They have found that the genes required are also those known to be involved in human learning and memory.

The worms also lose their reproductive abilities with age, Murphy's lab has reported in scientific journals, including Cell, due to the loss of activity of certain genes in their oocytes, or egg cells. "The gene list was very similar to the genes involved in the decline of mammalian oocytes, including those of humans," Murphy said.

"While great progress has been made in the identification of general longevity regulators, most aging research is focused on late-life physical or biochemical characteristics, such as loss of movement or death," said Murphy, whose cutting-edge research on age-related declines in memory and reproductive ability has received support from several important sources. "Early aging has not been as well studied. I believe that careful quantification of behavioral characteristics will allow us to better analyze these early declines as well as to assess therapeutic improvements."

The Glenn Foundation for Medical Research was founded in 1965 by Paul F. Glenn, a member of the Princeton Class of 1952, to extend the healthy productive years of life through research on the biological mechanisms of aging. The foundation has established similar research labs at a number of major universities, including Harvard, Stanford and the Massachusetts Institute of Technology.

"We are impressed by Princeton's promising research as well as its strong interdisciplinary tradition," said Glenn Foundation President Mark R. Collins. "We believe advances in research have the potential to prevent or delay age-related disease. We are pleased to include Princeton in the Glenn Foundation Consortium for Research on Aging."

Murphy's research previously has been recognized by the National Institutes of Health, the W.M. Keck Foundation, the American Society for Cell Biology, the McKnight Endowment Fund for Neuroscience, the Alfred P. Sloan Foundation, the March of Dimes and the Pew Charitable Trusts.

Murphy already has established interdisciplinary collaborations with several other researchers at Princeton to quantitatively address the aging process. The Glenn Labs grant will accelerate these studies by funding new experiments using cutting-edge technologies from a range of quantitative sciences.

"The Glenn Foundation award will vastly increase the amount and the types of aging research being done at Princeton," Murphy said. "We are starting a community that will be able to tackle problems in aging research in a very different way, using new techniques and approaches to figure out which genes and processes are involved in age-related declines. We expect this will open avenues to slowing or preventing these declines."