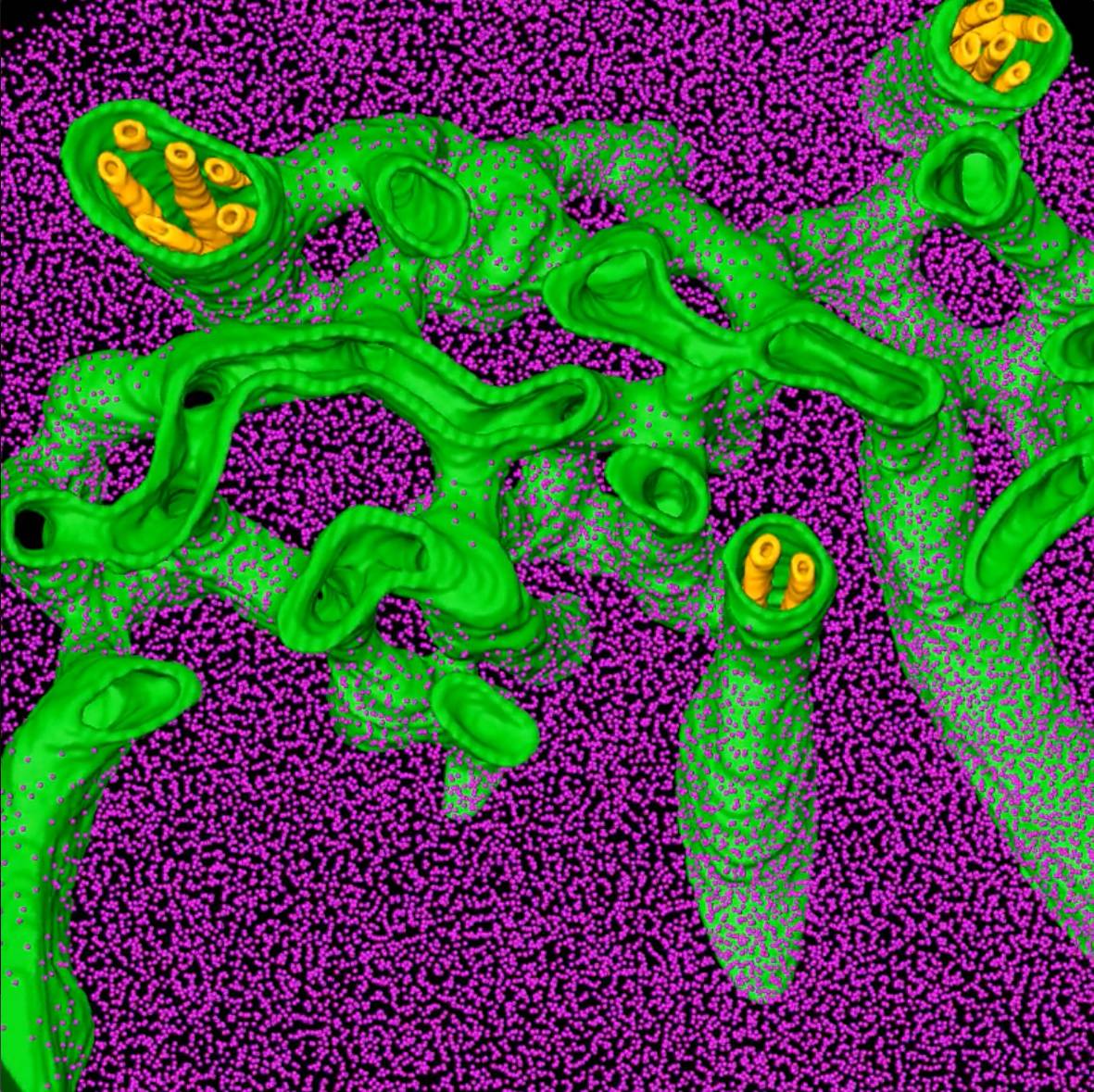 Two new studies of green algae — the scourge of swimming pool owners and freshwater ponds — have revealed new insights into how these organisms siphon carbon dioxide from the air for use in photosynthesis, a key factor in their ability to grow so quickly. Understanding this process may someday help researchers improve the growth rate of crops such as wheat and rice.

In the studies published this week in the journal Cell, the Princeton-led team reported the first detailed inventory of the cellular machinery — located in an organelle known as the pyrenoid —  that algae use to collect and concentrate carbon dioxide. The researchers also found that the pyrenoid, long thought to be a solid structure, actually behaves like a liquid droplet that can dissolve into the surrounding cellular medium when the algal cells divide.

“Understanding how algae can concentrate carbon dioxide is a key step toward the goal of improving photosynthesis in other plants,” said Martin Jonikas, an assistant professor of molecular biology at Princeton and leader of the studies, which included collaborators at the Max Planck Institute of Biochemistry in Germany and the Carnegie Institution for Science on the Stanford University campus. “If we could engineer other crops to concentrate carbon, we could address the growing world demand for food,” Jonikas said.

Aquatic algae and a handful of other plants have developed carbon-concentrating mechanisms that boost the rate of photosynthesis, the process by which plants turn carbon dioxide and sunlight into sugars for growth. All plants use an enzyme called Rubisco to “fix” carbon dioxide into sugar that can be used or stored by the plant.

In the first of the two studies reported this week, the researchers conducted a sweeping search for proteins involved in the carbon-concentrating mechanism of an algae species known as Chlamydomonas reinhardtii. Using techniques the researchers developed for rapidly labeling and evaluating algal proteins, the researchers identified the locations and functions of each protein, detailing the physical interactions between the proteins to create a pyrenoid “interactome.”

The search revealed 89 new pyrenoid proteins, including ones that the researchers think usher carbon into the pyrenoid and others that are required for formation of the pyrenoid. They also identified three previously unknown layers of the pyrenoid that surround the organelle like the layers of an onion. “The information represents the best assessment yet of how this essential carbon-concentrating machinery is organized and suggests new avenues for exploring how it works,” said Luke Mackinder, the study’s first author and a former postdoctoral researcher at the Carnegie Institution who now leads a team of researchers at the University of York, U.K. 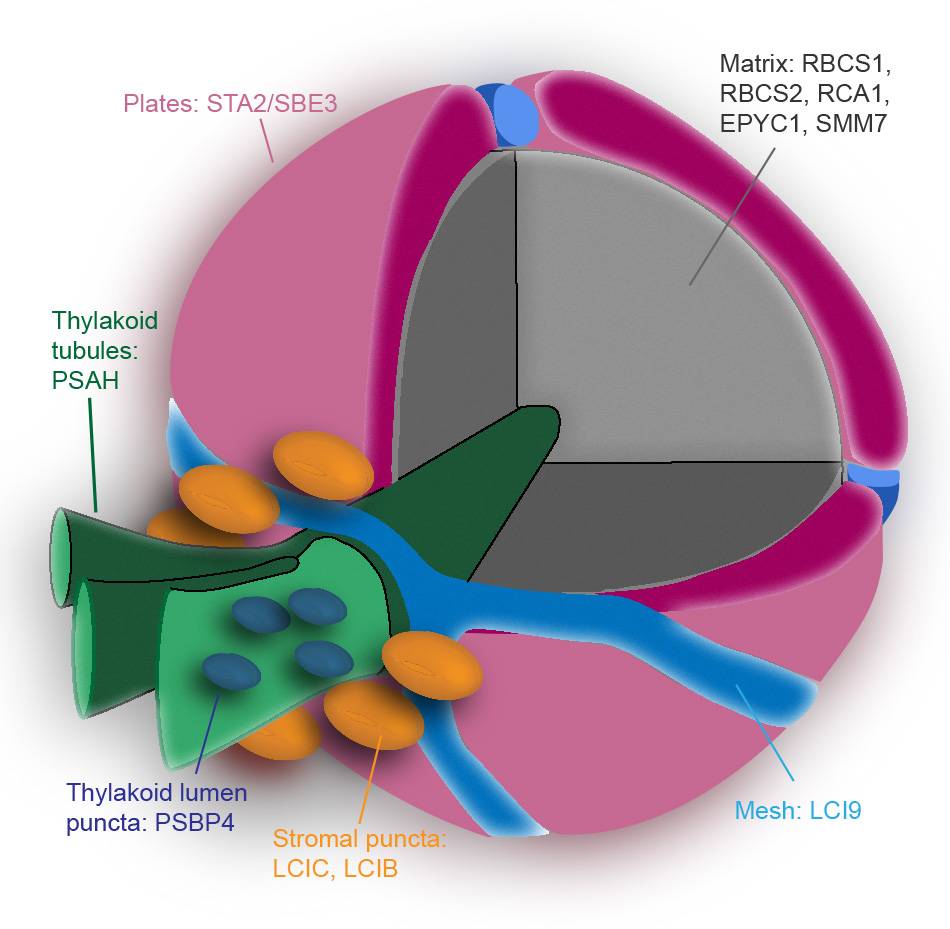 While observing the algae, Elizabeth Freeman Rosenzweig, then a Carnegie Institution graduate student, and Mackinder used a high-powered laser to destroy the fluorescent label on Rubisco in half of the pyrenoid, while leaving the label in the other half of the pyrenoid intact. Within minutes, the fluorescence redistributed to the entire pyrenoid, showing that the enzymes easily moved around as they would in a liquid.

Benjamin Engel, a postdoctoral researcher and project leader at the Max Planck Institute of Biochemistry, further explored this finding using another imaging technique called cryo-electron tomography. He froze and prepared whole algae cells and then imaged them with an electron microscope, which is so sensitive that it can resolve the structures of individual molecules.

The technique enabled Engel to visualize the pyrenoid in three dimensions and at nanometer-resolution. By comparing these images with those of liquid systems, the researchers confirmed that the pyrenoid was organized like a liquid. “This is one of the rare examples where classical genetics, cell biology and high-resolution imaging approaches were all brought together in one investigation,” Engel said.

The study enabled the team to ask how a pyrenoid is passed down to the next generation when the single-celled algae divide into two daughter cells. Freeman Rosenzweig noted that the pyrenoid sometimes fails to divide, leaving one of the daughter cells with no pyrenoid.

Using the fluorescent proteins, the team observed that the cell that failed to receive half the pyrenoid in fact could still form one spontaneously. They found that each daughter cell receives some amount of the pyrenoid in its dissolved form and that these nearly undetectable components can condense into a full-fledged pyrenoid.

“We think the pyrenoid dissolution before cell division and condensation after division may be a redundant mechanism to ensure that both daughter cells get pyrenoids,” Jonikas said. “That way, both daughter cells will have this key organelle that’s critical for assimilating carbon.”

This video demonstrates how cryo-electron tomography can be used to map the three-dimensional architecture of the pyrenoid, imaging its Rubisco enzymes (positions marked by purple spheres) and tubules that deliver materials to the pyrenoid. The video appears in the paper by Elizabeth Freeman Rosenzweig, et al. Cell 2017. Video courtesy of Benjamin Engel, Max Planck Institute of Biochemistry

To further explore how this might happen, Jonikas collaborated with Ned Wingreen, Princeton’s Howard A. Prior Professor in the Life Sciences and of Molecular Biology. Wingreen and his team created a computer simulation of the interactions between Rubisco and another protein called EPYC1 — discovered to be crucial to the pyrenoid by Mackinder and others on Jonikas’ team — which acts like glue to stick together multiple Rubiscos.

The computer simulation suggested that the state of the pyrenoid — whether a condensed liquid droplet or dissolved into the surrounding compartment — depended on the number of binding sites on EPYC1. In the simulation, Rubisco has eight binding sites, or eight places where EPYC1 can dock to a Rubisco. If EPYC1 has four binding sites, then two EPYC1s exactly fill all of the docking sites on one Rubisco, and vice versa. Because these fully bonded Rubisco-EPYC1 complexes are small, they form a dissolved state. But if EPYC1 has three or five binding sites, it cannot fill all of the Rubisco sites, and there are open sites on the Rubiscos for binding by additional EPYC1s, which also have free sites that can attract other Rubiscos. The result is a clump of Rubiscos and EPYC1s that form a liquid-like droplet.

The change in the system’s phase depending on the ratio of EPYC1 to Rubisco binding sites can be considered a “magic number” effect, a term typically used in physics to describe conditions where a specific number of particles form an unusually stable state. “These magic numbers, besides being relevant for pyrenoid systems, may have some currency in the field of polymer physics and potentially in synthetic biology,” Wingreen said.

Wingreen and Jonikas are continuing their collaboration and hope to develop the project both theoretically — by exploring different flexibilities and configurations of Rubisco and EPYC1 — and experimentally, by combining the two proteins in a test tube and manipulating the number of binding sites.

“The previous thinking was that the more binding sites they have, the more the proteins tend to cluster,” Jonikas said. “The discovery that there is a magic number effect is important not only for pyrenoids, but perhaps for many other liquid-like organelles found throughout nature.”

With additional studies, these findings may yield important insights into ensuring the availability of fast-growing crops for an expanding world population.

The work was supported by the National Institutes of Health (grants S10RR027425 and 7DP2GM119137-02), the National Science Foundation (grants EF-1105617 and IOS-1359682), the Simons Foundation and Howard Hughes Medical Institute (grant 55108535), Princeton University, the University of York and the Carnegie Institution for Science.