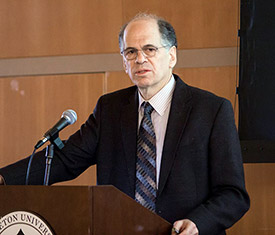 Investigating long-term solutions to the world's energy needs and investing in sustainable technologies are crucial as the climate crisis comes into focus, a set of experts cautioned at Princeton University on Nov. 14.

"There are inventive ways to deal with the challenges of global climate change," said Stewart Prager, a professor of astrophysical sciences and director of the Princeton Plasma Physics Laboratory. "But it's vital to focus on the big picture and not just the short-term."

The third annual meeting of Princeton E-ffiliates Partnership brought together about 200 academic experts and industry leaders in a day-long discussion of the challenges in creating alternative energy sources, the future of energy investment, and the key areas of energy technology.

E-ffiliates is a membership-based program initiated by the Andlinger Center for Energy and the Environment to accelerate solutions to problems of sustainable energy and the environment by bridging industry and academia.

Delivering the meeting's opening talk, Prager analyzed in straightforward terms the viability of fusion energy. While it will not be a complete replacement for fossil fuels, fusion energy has the potential to be a major part of the global energy source portfolio — but probably will not enter the portfolio for 25 years, Prager said.

"When fusion enters, it's going to be in the second half of the century when the crisis will become even more severe," said Prager. "We cannot just wait for solutions to present themselves. We have to work on it now for it to become available."

Fusion energy is the primary focus of the Princeton Plasma Physics Laboratory, a U.S. Department of Energy lab that Princeton University administers. Fusion is different from conventional nuclear power because it involves fusing light atoms such as hydrogen, as opposed to splitting heavy atoms such as uranium. Noting that fusion is the same process that powers the sun, Prager said fusion energy is one of the largest science and engineering challenges of this era. But the benefits of essentially limitless, universally available, safe and clean power make it worth pursuing, he said.

Prager described leading efforts to develop fusion technology, including experiments at Princeton and an international project in France known as ITER. Despite these projects, the United States does not have a clear roadmap or long-term budget commitment necessary to bring fusion to reality.

"Scientists and engineers are confident they can make fusion power on a large scale," said Prager. "If there's societal will for it, we can have a clean, safe and abundant domestic fusion energy source in our lifetime."

The meeting included discussions on investment opportunities in the sustainable energy sector as well as discussions of the technological frontiers of grid-scale energy storage, sustainable building materials — projects that received competitive E-ffiliates seed funding in 2013-14. Another talk addressed the use of biotechnology to create sustainable fuels. 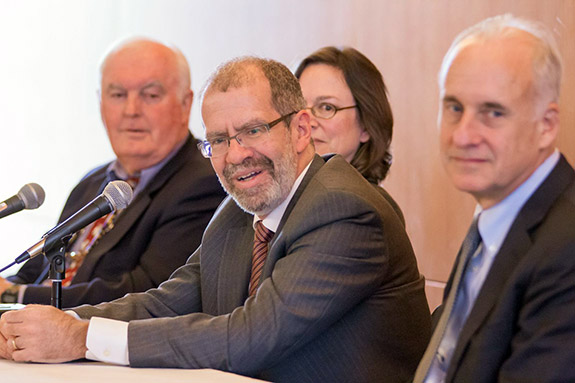 During a panel discussion on energy investment, Carter Bales, chair of NewWorld Capital Group, noted that the current energy situation is "tragic" due to a lack of economic interest and the absence of ongoing dialogue in a high-energy consuming society.

The hydrocarbon industry has monopoly benefits and market power, Bales said, yet it is massively subsidized. "When you try to bring other technologies in to compete, they don't add efficient scale. There needs to be ways to help companies with good technologies to get down the purchase power curve and actually compete," he said.

Bales said the United States needs a long-term approach to energy research, which should include four goals: radical reduction over the next 30 to 40 years in use of carbon-based fuels that lead to greenhouse gas emissions; putting a meaningful price on carbon; new regulations toward energy efficiency; and facing the challenge of sustainable-energy investment.

The panel included Andrew Golden, president of the Princeton University Investment Company; Richard Kauffman, chair of Energy and Finance for New York State and chair of the New York State Energy Research and Development Authority; and Emily Carter, founding director of the Andlinger Center for Energy and the Environment.

Carter said the drumbeat is starting for more sustainable practices around the world. However, the means to produce a sustainable energy-dense fuel is still far away. "In terms of electricity, we have a portfolio of technologies we can use right now that don't involve carbon, like solar and wind," she said. "But the lack of cost-effective and efficient grid-scale storage — the subject of other presentations today — holds both of them back, along with current costs compared to fossil alternatives. Because we don't have a price on carbon, many technologies are still not competitive."

"It's not the problem of technology per se," Kauffman said. "The problem comes down to the adaptation and market acceptance of the technology that exists. We have technology for optimization but no one in the market wants to pay for those services."

The connection between markets, companies and universities has to be tighter, Kauffman said, noting the challenge is to make sure there is a good relationship between innovation and development. "The focus is how to integrate all those together," he said. 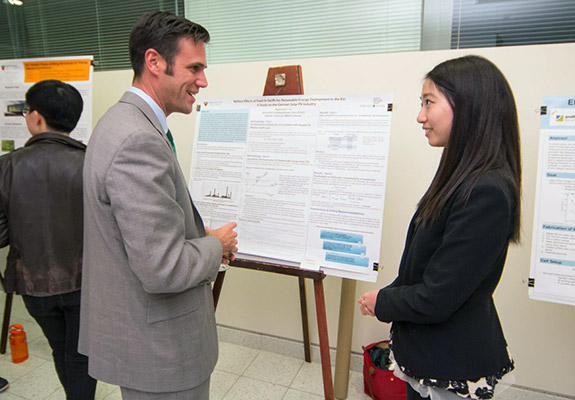 Michael Oppenheimer, the Albert G. Milbank Professor of Geosciences and International Affairs and director of the Program in Science, Technology and Policy, closed the meeting by presenting sobering effects of climate change, including changes in food production, weather and wildlife.

The information is based on the fifth assessment report of the Intergovernmental Panel on Climate Change. Oppenheimer, a coordinating lead author of the report, said Earth's temperature has increased non-uniformly since 1850 and sea levels have increased in conjunction.

One-third of the global greenhouse gas emissions comes from the energy sector, said Oppenheimer. "The warming is ascribed to a buildup of greenhouse gases into the atmosphere, largely from fossil fuels.

"The window for action is rapidly closing," he said. "It's not a fantasy.