The current Ebola outbreak has killed thousands in West Africa and spread concern around the world. 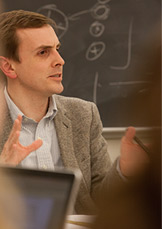 The outbreak has raised a range of difficult questions, from how nations such as the United States should respond in Africa, to the most appropriate measures to take at home and whether to deploy unproven treatments.

Jason Schwartz, the Harold T. Shapiro Postdoctoral Research Associate in Bioethics at the University Center for Human Values at Princeton, addresses some of those issues in this Q&A. Schwartz, a member of Princeton's Class of 2003, studies ethical, historical and policy issues in medicine and public health.

Question: Why are health systems in West Africa so poorly prepared to deal with the Ebola outbreak?
Answer: We are now experiencing the tragic consequences of failing to appreciate the need to invest more resources, expertise and support in developing countries, including those where the Ebola outbreak is happening. Such investments would have allowed for health systems in those parts of the world to be better equipped to respond to and minimize the unfolding crisis. For decades, fairly narrow global health programs targeting single diseases have received greater attention and financial support than broader efforts to strengthen health infrastructures in developing countries. Those choices have contributed to this situation growing into the global public health emergency it is now.
Q: What is shaping public health decision-making in the United States in response to Ebola?
A: From the perspective of a wealthy nation like the U.S., there is a need to look after its own citizens as well as a national security and humanitarian urgency to ensure we are helping address the unfolding crisis in the nations where it is happening. Some argue that we should restrict international travel, or that we should prevent people who have been exposed to Ebola from coming back for treatment. But we have both an interest and, many would agree, an obligation to provide the kinds of support and resources that will help get a handle on the crisis. That will help both citizens of the countries where the outbreak is strongest and, by extension, help us. This isn't a time for isolationism, this is a time for global engagement.
Q. Do nations such as the United States have a responsibility to help fight Ebola in the African nations 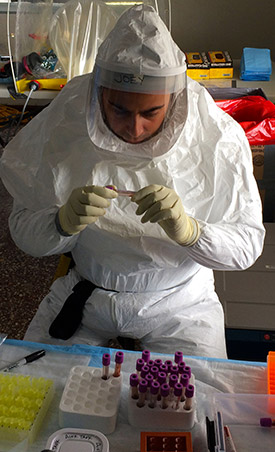 where the outbreak is the worst?

A. Individuals are suffering. Communities are suffering. And there is uncertainty about what could happen next and who could be affected. That ought to create a spirit of global solidarity that provides strong support for a coordinated, focused global response — not just because it is in our own individual interests to dedicate resources and attention to West Africa but because it is consistent with our obligations to help our fellow global citizens regardless of what passport they carry or where they were born.

Q. There is now an increased urgency to make available potential Ebola treatments and vaccines. How do you do that safely amid an outbreak?

A. First, the understandable enthusiasm for these treatments ought not take away from the time-tested public health measures — such as carefully identifying and monitoring those who may have been exposed — that we know can do a great deal of good in containing the outbreak. We need to give just as much attention to scaling these measures up as we do to developing drugs or vaccines.

As for possible vaccines and treatments, there are two competing demands in responding to situations like this. The first is to get effective interventions to as many people as quickly as possible. That's priority Number 1. Priority 1A is to be sure that whatever we administer is as safe and as effective as possible — particularly on a large scale. Should we accelerate the use of an unproven product in the field on a humanitarian basis, hoping that it might do some good when other options seem to have failed? Or should we move in a way that appreciates that it's ethically problematic to use something that may not do any good and could do harm? These are complicated ethical questions that are still being sorted out.

As we speak, the World Health Organization has convened groups of experts to assess these arguments and to chart a path forward that is sensitive to both sets of concerns. The global health community is watching their work closely, particularly as the development of vaccines and treatments is now proceeding at unprecedented speed.
Q. Americans and Europeans who have contracted Ebola in Africa have often been flown back to their home nations, where they have access to top-notch care. Africans themselves are often left to face the disease with few resources. What are we to make of this disparity?
A. This entire crisis is filled with injustice. It's filled with inequity, in terms of where it's happened, how it could happen, and in terms of the treatments and interventions that are — or, more often, are not — available. It is hard not to notice that if a Western physician or nurse is diagnosed, they're off in a private jet to a gold-standard facility. There, they get the great kind of care that isn't available in the place they contracted Ebola. Is this fair? Is this right? We need to appreciate that we're desperately in need of trained, talented, dedicated medical personnel to join the fight where the fight is happening. It is a tremendous personal sacrifice these people are making. And part of encouraging that needed expertise to get there is ensuring that if they do encounter that disease themselves, they will be afforded the kind of protection and medical care that reflects the great personal risk they accepted in volunteering to help in this effort.
Q. What issues need to be addressed once the immediate crisis has passed?
A. There are two main threads. One will be following through on the justified enthusiasm and investment that we are now seeing for products and procedures that could specifically help us with Ebola. That will give us an important set of tools we don't have now. But for every Ebola, there are many other threats on the horizon, some we already recognize, others we don't. And we also can't lose sight of the fact that diseases like malaria, tuberculosis, HIV, diarrheal diseases and malnutrition in these same countries and neighboring countries cause far more illnesses and deaths every single day than Ebola has throughout this outbreak.
The global community needs to take a careful, fresh look at how we prioritize our energies and our investments in protecting and improving global health. It requires a focus that recognizes both the need for disease-specific investments and for the kinds of investments that are not focused on a particular disease but will improve the baseline of population health, improve access to basic but critical medical interventions, and therefore offer potential benefits against an entire array of health threats.