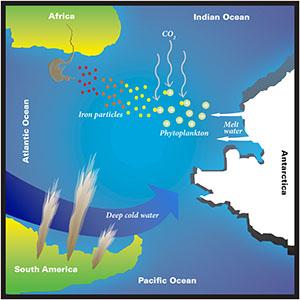 Iron is an essential nutrient not only for humans but also for microscopic marine life. Now a new study has mapped the various types of iron particles in the ocean around Antarctica, explaining why some regions are better than others at removing carbon dioxide from the atmosphere.

The study found that only a few regions contain the correct form of iron needed to sustain the growth of marine algae, also known as phytoplankton, which take up carbon dioxide.

The study by Princeton researchers and international collaborators was published in the Nov. 30 issue of the journal Science.

"Our study explains why although there is iron in the Southern Ocean, in some regions we do not see the same amount of growth of phytoplankton that we see elsewhere in the world," said Princeton Professor of Geosciences Satish Myneni, who oversaw the study.

"Understanding what is limiting the growth of these algae is important because these organisms convert atmospheric carbon dioxide into plant biomass, a process that is sometimes called the biological pump of carbon dioxide into the ocean," said Bjorn von der Heyden, lead author of the study and a graduate student from Stellenbosch University in South Africa who spent a year at Princeton University as a visiting student research collaborator. "The Southern Ocean is more important than the Amazon rainforest for removing carbon dioxide from the atmosphere." 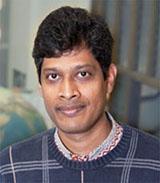 Von der Heyden collected seawater samples during three different research excursions to the Southern Ocean, and worked with Myneni and Tolek Tyliszczak, a staff scientist at LBNL, to use a powerful microscope to analyze the samples and determine what forms of iron were present. The researchers detected five types of iron, ranging from ferrous iron, which is generally bioavailable, to magnetite and ferric iron (rust), which are poorly bioavailable.

Most of the iron in the southern ocean comes from rivers emptying into the ocean from South Africa, melting ice from Antarctica, dust plumes from South America, or upwelling of water from the deep ocean, said Myneni. 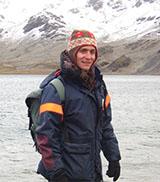 Using data on where the samples were collected, the researchers constructed a map showing where the five forms of iron were found. (Figure 2) The biologically available forms were located closer to Antarctica, in areas that were fed by upwelling, and close to the African continent. Regions between the two continents tended to be dominated by iron that was not bioavailable.

"We do not know why the regional differences in the forms of iron exist," said Myneni, "but they may be related to the source of the iron. This is something we would like to explore."

The research is part of the African Centre for Climate and Earth System Science (ACCESS) which is a research initiative of Princeton's Grand Challenges Program, which seeks to tackle complex global environmental problems through the integration of research and teaching. Additional support was provided by the National Science Foundation and the Department of Energy. 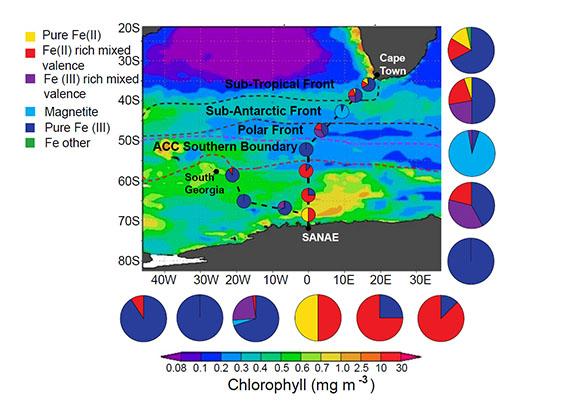