Method Optimizes the Addition of Wind, Solar to the Electricity Grid 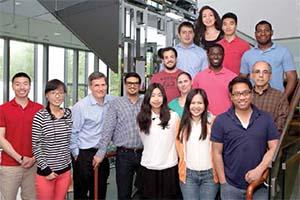 The use of renewable energy sources such as wind and solar is projected to continue to increase over the coming decades. But the high variability of these sources — solar power can be generated only during daylight and diminishes when cloudy, while wind is difficult to forecast — limits their ability to replace fossil fuel-powered generators in the electricity grid.

To integrate these renewable sources into today’s grid, a system for storing excess power for later use is essential. However, today’s batteries are expensive and limited in capacity, and they incur high losses in the conversion between direct and alternating current. Until better batteries and current inverters are available, grid operators must find ways to maximize the usage of the available storage systems in a cost-effective manner.

Warren Powell, professor of operations research and financial engineering, and his team are developing models to employ battery storage in a way that takes advantage of the spikes and compensates for the dips in wind power, while also considering issues such as consumer demand and electricity prices.

The team has developed a new algorithm based on an approach known as “approximate dynamic programming” that is capable of determining when and where to use battery storage given specific scenarios, such as the amount of electric power available, the demand on the system, grid congestion and pricing. The approach allows grid-operators to make decisions about when to make adjustments to fossil-fuel generators or to draw on storage in response to unexpected variations in wind and solar energy.

The algorithm is capable of modeling many types of energy storage methods, alone or in combination. These methods range from lithium-ion batteries to more complicated schemes involving storing energy in the form of water pumped uphill or as compressed air. Each type of storage device has different storage capacity and different on/off times: for example, lithium-ion batteries can release energy far more quickly than pumped water.

To test the model, the researchers ran simulations based on data from one of the largest power grids in the United States, which serves 61 million people in 13 states in the Mid-Atlantic and Midwest. The researchers demonstrated that the algorithm could significantly reduce congestion by coordinating storage devices across the grid while managing gas turbines in the presence of relatively high amounts of wind and solar energy.

“Our approach makes it possible to cope with the volatile nature of renewable sources of energy, especially wind, which can have extremely high peaks but can also drop to zero,” said Powell, whose work is funded by the National Science Foundation. “This algorithm makes it possible to make good decisions under uncertainty, allowing us to understand the limits of renewables in an energy portfolio.”