A team led by researchers from Princeton University, Michigan State University and the Indonesian Institute of Sciences has confirmed the discovery of a new bird species more than 15 years after the elusive animal was first seen on the Indonesian island of Sulawesi.

The newly named Sulawesi streaked flycatcher (Muscicapa sodhii), distinguished by its mottled throat and short wings, was found in the forested lowlands of Sulawesi where it had last been observed. The researchers report in PLOS ONE that the new species is markedly different from other flycatchers in its plumage (feathers), body structure, song and genetics, proving that it is a new species. Because the bird has survived in a region heavily degraded by cacao plantations, the species is not currently at risk of extinction. 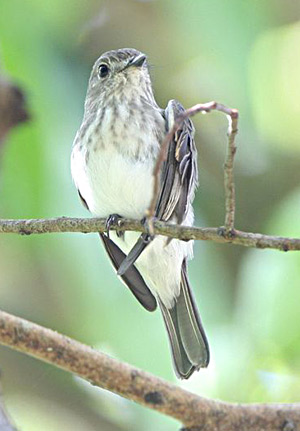 "Considering that 98 percent of the world's birds have been described, finding a new species is quite rare," said co-author J. Berton C. Harris, a postdoctoral fellow at Princeton's Program in Science, Technology and Environmental Policy, which is based at Princeton's Woodrow Wilson School of Public and International Affairs. "And despite being a globally important avian hotspot, Sulawesi has largely gone unstudied by ornithologists."

The new species found by Harris and his collaborators has awaited formal scientific description since 1997, when the bird was originally spotted in a patchy remnant of forest. At the time, the Sulawesi birds were thought to be migratory gray-streaked flycatchers (Muscicapa griseisticta).

With funding from the National Geographic Society, Harris and some of his collaborators traveled to Central Sulawesi in the summers of 2011 and 2012 to continue the search for the mysterious animal. After weeks of camping near the town of Baku Bakulu, the researchers finally found the bird — in the place it was originally seen — in summer 2012, observing several of them.

A full examination of the bird's measurements, genetics, plumage and sound revealed that, compared with similar flycatchers, the bird has shorter wings, a more strongly hooked bill and a shorter tail. Its plumage also is distinct, as the bird has a plainer face and streaked throat. The new species' DNA shows that it is only distantly related to the gray-streaked flycatcher, and it most closely resembles the Thailand population of the Asian brown flycatcher (M. dauurica siamensis).

In its song, the new bird is rather similar to other Asian species, producing whistles, chirps and trills, but is slightly more high-pitched and lacks the lower-pitched notes that other species make. Co-author Pam Rasmussen of Michigan State University, who runs the global bird sounds website AVoCet where the bird's song is archived, said, "We were lucky to be able to make the first known recording of this bird singing."

While the new species does not require pristine rainforest to survive, it does appear to be dependent on tall forest trees spared by farmers.

"At this point, the species is not at risk for extinction. However, this could change if agriculture intensifies in this region," said Rasmussen.

Princeton Professor David Wilcove, who is Harris' adviser and was not part of the study, said this research shows why studying biodiversity is so important. 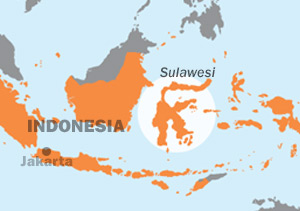 "The discovery of this previously unknown bird demonstrates once again how much we have yet to learn about the biodiversity of this planet and, especially, the biodiversity of the tropics," said Wilcove, professor of ecology and evolutionary biology and public affairs at the Wilson School. "Birds may well be the most intensively studied class of vertebrates on Earth — with millions of birdwatchers looking for them — yet scientists are still discovering new species."

The Latin name the team gave the bird pays homage to the late ecologist and ornithologist Navjot Sodhi, who was Harris' former mentor and a professor at the National University of Singapore. Several animal species have been named after Sodhi, including a snail, a fish and a new genus and species of crab.

"The naming of so many species in honor of Sodhi shows how important he was to his students and collaborators," Harris said. "He probably would have been particularly pleased with our bird description, though, because he was an ornithologist, and so few bird species remain to be described."

The paper, "A new species of Muscicapa flycatcher from Sulawesi, Indonesia," was published online Nov. 24 by PLOS ONE. Co-authors include Ding Li Yong from the Australian National University and Southeast Asian Biodiversity Society, Dewi M. Prawiradilaga from the Research Center for Biology-LIPI, Dadang Dwi Putra from the Celebes Bird Club in Indonesia, Philip D. Round from Mahidol University in Bangkok and Frank E. Rheindt from the National University of Singapore.

The project was funded by the National Geographic Society (NGS CRE 8919-11), the Loke Wan Tho Memorial Foundation and an EIPR scholarship at the University of Adelaide. Lab work for the project was co-funded by a start-up grant from the National University of Singapore Faculty of Science. The Research Center for Biology-LIPI supported the field research and provided facilities for laboratory analysis.