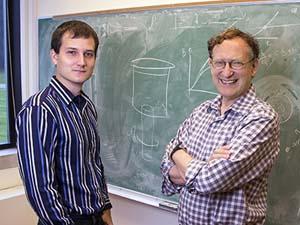 Today’s gasoline-powered internal combustion engines are sadly inefficient — only about 25 percent of the fuel’s energy  is used to move the vehicle forward, with the rest lost as heat.

Princeton Professor of Astrophysical Sciences Nathaniel Fisch and graduate student Vasily Geyko have discovered a phenomenon that could lead to the design of more efficient engines. While most efforts to boost efficiency involve minor adjustments to engine performance, Fisch and Geyko’s approach involves changing the fundamental design of the engine. Internal combustion engines work by igniting a compressed gasoline-air mixture that combusts to produce hot gases. Those gases rapidly expand to push on a piston in a cylinder. But there are natural limits to the efficiency with which the chemical energy in the fuel can be converted to motion.

In work supported by the U.S. Department of Energy and the U.S. Defense Threat Reduction Agency, Fisch and Geyko investigated theoretical aspects of spinning gases and found that setting a gas into a spinning motion inside an engine’s cylinder could improve efficiency. They found that a gas spinning around the axis of a cylinder has an increased ability to absorb heat without rising in temperature, a factor known as heat capacity. Due to the laws of thermodynamics, a rise in heat capacity increases the compressibility of the spinning gas, which leads to greater transfer of the fuel’s chemical energy to motion.

An engine that utilized this effect could contain a gas that is injected into the cylinder in a vortex-like motion to start it spinning. The new design could increase the engine efficiency by several percent, a meaningful amount given the performance of today’s engines.

“We have demonstrated that it is possible in theory to increase engine efficiency by using the phenomenon of rotation-dependent heat capacity,” Fisch said. “This boost in engine efficiency could be especially useful in reducing nitrous oxide emissions when the engine has just been turned on and is running cold. However, we will need to collaborate with others to conduct experiments to explore the potential of the technology.”

Fisch, who also is the associate director for academic affairs at the Princeton Plasma Physics Laboratory, developed these ideas while working on a project aimed at exploring the use of nuclear fusion as an energy source for the future.  He and Geyko were studying the effect of spinning plasma — which is a cloud of charged particles — inside a cylinder. They had first simplified the problem by examining a neutral gas, and it was then that they discovered the effect that rotation has on heat capacity and compressibility.

Optimizing engine efficiency via a spinning gas is one of several technologies developed by Fisch and colleagues. He also is working on a high-throughput plasma filter to process nuclear waste, and on using plasmas to boost the intensity of lasers.