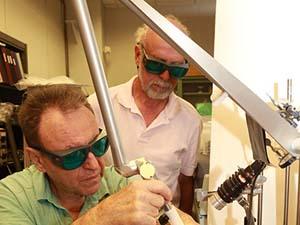 No longer only for the daring and decadent, tattoos have become commonplace over the last decade. According to a 2010 Pew Research study, nearly 40 percent of people ages 18-29 sport at least one region of permanently inked skin. Accompanying the increase in tattoo application has been an uptick in tattoo removal. Roughly 40,000 tattoo removal procedures are carried out each year, according to the American Society for Aesthetic Plastic Surgery, with a much larger untapped market of people who have not removed their tattoos due to concerns about the cost or scarring.

A new technology that uses very short pulses of low-energy laser light delivered in rapid succession could enable the removal of unwanted tattoos safely and quickly. Developed in Princeton’s Department of Mechanical and Aerospace Engineering, the new system breaks up the ink molecules with little or no injury to the skin. Existing technologies, which use higher energy lasers, can cause skin damage resembling a second-degree burn, and long-term scarring. Removal often takes six or more treatments, with several weeks spent between treatments to allow skin to heal.

The non-damaging tattoo-removal technology developed at  Princeton uses a type of laser called a femtosecond laser,  which fires light pulses that are one million times more intense  than those of existing tattoo-removal lasers, said Alexander  Smits, the Eugene Higgins Professor of Mechanical and  Aerospace Engineering, who pioneered the technology with Szymon Suckewer, a professor of mechanical and aerospace  engineering. Each laser pulse is of very short duration and focused on a very small spot on the skin. The energy of each light pulse interacts directly with ink molecules, breaking bonds between them with almost no heating of the skin tissue.  The broken molecules of ink then either migrate out of the skin or are taken up by the bloodstream and later excreted from the body.

A single laser can remove different colors of ink, so the technique is likely to be less expensive than existing technologies, which require separate lasers for different colors. Because little or no damage to the skin occurs, repeated treatments can be carried out over shorter periods of time. Testing has demonstrated the technique is effective on human skin.

“Our tests demonstrate that this technology is less damaging to the skin, there is no pain, and it is also more effective than traditional laser-based methods,” Smits said. “We see a great deal of potential in this technology.”