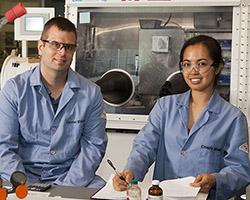 Expensive and rare, platinum is a crucial industrial catalyst. During the manufacture of consumer goods, miniscule amounts of platinum become trapped in consumer products, costing industry millions of dollars a year. But Paul Chirik, Princeton’s Edwards S. Sanford Professor of Chemistry, and his research team found that they could replace platinum with a much more common substance — iron.

Chirik’s approach coaxes iron into acting in a manner that is similar to pricier metals, which could save manufacturers money and reduce the environmental impact of mining for precious metals. Platinum, palladium and other exotic metals are coveted as efficient catalysts because they transfer two electrons at a time between molecules during a chemical reaction. Iron, in contrast, typically transfers only one electron at a time. "The question is, how do you take a metal that wants to do one-electron chemistry and shut that off so that it does two-electron chemistry," Chirik said. The solution pioneered by Chirik and Aaron Tondreau, who received his Ph.D. in 2011, was to pack the iron in a bulky molecule that contains a highly reactive unpaired electron. Thus, both the iron and the surrounding molecule react during catalysis, resulting in a two-electron transfer. Chirik and graduate student Crisita Atienza are working on a hardier version of the catalyst.