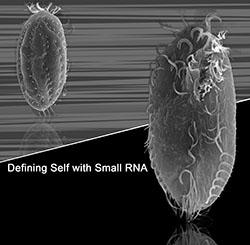 A pond-dwelling protozoan labels its DNA with RNA tags to help it keep track of which genes to keep and which are unnecessary "junk" DNA, Princeton researchers have found. By applying the tags in the lab, the researchers could control which parts of the DNA the protozoan kept.

The findings shed light on how organisms handle the vast amounts of non-essential DNA, or junk DNA, found in every living creature from bacteria to plants to humans.

"We found that the way these organisms distinguish between important and non-important DNA is by marking the important genes with tags called pi (pronounced like the Greek letter) RNAs," said Laura Landweber, a professor in Princeton's Department of Ecology and Evolutionary Biology. "It is like when you are moving out of an apartment and you go through the rooms putting labels on all the items that you want the movers to take."

The findings are suprising because while this protozoan uses piRNAs to mark DNA as keepers, other similar organisms use the tags to label DNA that needs to be silenced or jettisoned, said Landweber. "We think that different organisms evolved different solutions to the problem of tagging junk DNA," she said.

The study, which appeared in a December issue of the journal Cell, was led by Landweber and conducted by graduate student Wenwen Fang and postdoctoral fellows Xing Wang and John Bracht at Princeton as well as Mariusz Nowacki, a former postdoctoral researcher who is now at the University of Bern in Switzerland.

PiRNAs are tiny molecules made up of RNA, which is similar to DNA and plays many roles in regulating gene expression, Landweber said. The researchers discovered this tagging system in a single-celled protozoan called Oxytricha trifallax, which uses about 4% of its genome for daily growth.  Earlier this year, members of Landweber's team discovered a complementary system for marking trash DNA with special methyl markers, a result that was published in the journal Genome Biology.

"Oxytricha has its own solution to the riddle of junk DNA, a solution that we humans do not have," Landweber said.

The tagging system in Oxytricha may have developed for the purpose of deporting foreign bits of DNA that make their way into the cell, Landweber said. Many organisms have evolved methods for identifying and inactivating foreign interlopers and mobile elements, sometimes called jumping genes that can move from one organism to another.

What is more, the researchers could control this tagging system. The researchers created their own piRNA tags for DNA regions that normally wouldn't get tags. When they injected these artificial piRNA tags into developing cells, the cells would keep the DNA sequences instead of getting rid of them. "We have the ability to reprogram the portion of the gene that gets retained versus deleted," Landweber said.

Landweber's team also showed that piRNAs can transmit information from parent cells to offspring and even to the subsequent generation of cells. "These piRNAs provide a whole other layer of information about which genes to use," Landweber said. "This passing of information through the generations via RNA is a form of 'epigenetic inheritance,' which does not involve genes themselves but rather external factors such as tags that specify which genes will be used." Epigenetic inheritance has been demonstrated in numerous simple organisms and evidence exists for it in humans as well.

Over the past decades, scientists have realized that RNA controls DNA expression rather than being simply a 'messenger' as was previously thought. The term piRNA is short for Piwi-interacting RNAs, so named because they interact with Piwi proteins, which play a role in cell division.

Funding for the study was provided by the National Science Foundation and the National Institutes of Health (NIH). Wenwen Fang was supported by a predoctoral Department of Defense fellowship.

Read a commentary on the research that appeared in Cell (subscription required).