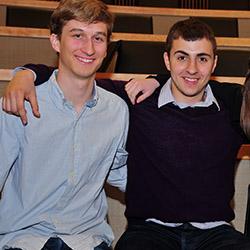 “Amazon, eBay and Google are just a few companies that Princeton alumni have started or run.  We know that current students can start world-changing ventures of similar impact,” said Taylor Francis ’14, a major in the Woodrow Wilson School of Public and International Affairs. Taylor shares the title of co-president of the Princeton Entrepreneurship Club with computer science major Momchil Tomov ’14.  The E Club provides support both for Princeton undergraduates who have already developed a product as well as students who have an idea and want to build on it. The club holds a variety of events, including pitch competitions, feedback sessions with mentors and a speaker series.  Last year, they hosted the East Coast Startup Summit, which drew students from around the country for a weekend of workshops and teambuilding. Tiger Treks, a monthly tour of New York startups and venture capital firms, gives students a glimpse of established players in the field. During the 2011 fall break, the E Club headed to California for a week-long trip to Silicon Valley. Nearly half of the attendees were offered jobs or internships at companies they visited on the trip, including Facebook, Path, Nest and Square.  The E Club also offers Hackathons, day- or weekend-long events where programmers team up to work on a project and focus on creating a product. The club’s success in fostering the entrepreneurial drive at Princeton is evident in the number of startups that have grown out of these events. These include Art.sy, which recommends art similar to the way Pandora recommends music, and SCVNGR, a location-based smartphone game.  “It’s the ultimate career path — a beautiful way to combine a liberal arts education with hard math and science skills,” Tomov said.