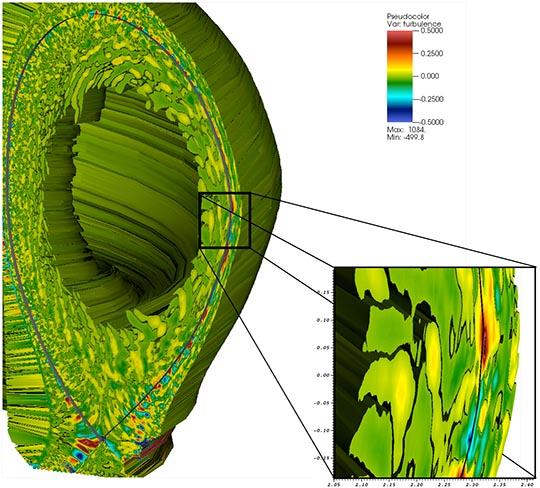 Three Princeton University researchers have been granted a total of 345 million hours of processing time on two powerful supercomputers as part of the 2015 Innovative and Novel Computational Impact of Theory and Experiment (INCITE) awards from the U.S. Department of Energy.

Emily Carter, the Gerhard R. Andlinger Professor in Energy and the Environment and professor of mechanical and aerospace engineering and applied and computational mathematics, and a collaborator at the Lawrence Berkeley National Laboratory were awarded 25 million hours to enable their project, "Ab Initio Simulations of Carrier Transport in Organic and Inorganic Nanosystems."

Choong-Seock Chang, managing principal research physicist at the Princeton Plasma Physics Laboratory, received 270 million hours to stage complex simulations of how charged particles behave in the edge of a plasma, which is a crucial issue in producing fusion energy.

Jeroen Tromp, the Blair Professor of Geology and professor of geosciences and applied and computational mathematics, is part of a group to receive 50 million processor hours (150 hours over three years) to start a new project called "Global Adjoint Tomography."

The highly competitive awards allow researchers access to Titan, the Cray XK7 supercomputer at Oak Ridge National Laboratory, which is the world's second-largest computer and can do over 20 quadrillion calculations per second; and Mira, an IBM Blue Gene/Q computer at Argonne National Laboratory that can perform 10 quadrillion calculations per second. One day on Mira is equivalent to what the average person could accomplish in 20,000 years on a personal computer.

All of the Princeton awardees are associated or collaborate with the Princeton Institute for Computational Science and Engineering.