The crucial next steps on the roadmap to developing fusion energy will be the focus of more than 70 top fusion scientists and engineers from around the world who will gather at the University of California-Los Angeles (UCLA) this month. The Oct. 15-18 session will kick off a series of annual workshops under the auspices of the International Atomic Energy Agency (IAEA) that will address key scientific and technological challenges facing countries developing fusion as a source of clean and abundant energy for producing electricity.

"There's nothing like face-to-face talk and presentations to help people resolve common challenges," said Hutch Neilson, who directs advanced projects at the U.S. Department of Energy's Princeton Plasma Physics Laboratory (PPPL) and will chair the workshop at UCLA.

PPPL hosted a worldwide gathering of fusion scientists at Princeton University last year that led to planning for the workshops. "We felt there was a compelling need for international discussions to look at a wide range of options in an unbiased way," said Stewart Prager, director of PPPL. "There's proven to be a lot of interest in the international community." 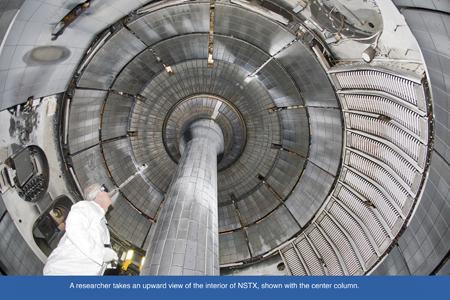 The workshops aim to help participants chart pathways to the demonstration fusion power plants that the major world programs envision. Such "DEMO" plants would mark the final step before the construction of commercial fusion power stations that could operate by mid-century.

Fusion powers the sun and stars. The process takes place when the atomic nuclei — or ions — in electrically charged gas called plasma fuse under extreme heat and pressure and release a burst of energy. Fusion programs seek to recreate this process on Earth under laboratory conditions.

The IAEA gathering comes against the backdrop of the construction of ITER, a huge experimental facility that the European Union, the United States and five other countries are building in the south of France to showcase fusion as a practical source of energy. Plans call for ITER to produce 500 million watts of fusion power for up to 500 seconds by the late 2020s.

Individual countries are exploring their own next steps toward fusion with different degrees of urgency, based on their perceived need for such energy. The steps themselves remain tentative and subject to government confirmation. "What's needed at present is for the planners to come together and discuss their different roadmaps," said nuclear engineering professor Mohamed Abdou, who will host the workshop as director of the Fusion Science and Technology Center at UCLA. "This will help us understand the goals and assumptions behind the plans of the major fusion programs."

A look at the possible roadmaps that countries are considering:

China—The world's most populous nation seeks to reduce its dependence on coal, which produces 70 percent of its electric power. China is currently pushing ahead with plans for a device called China's Fusion Engineering Test Reactor (CFETR) that would develop the technology for a demonstration fusion power plant. Construction of the CFETR could start around 2020 and be followed by operation of a DEMO in the 2030s.

Europe and Japan—These programs are jointly building a powerful tokamak called JT-60SA in Naka, Japan, as a complement to ITER. Plans call for construction to be completed in 2019. The Japanese and Europeans will then pursue similar but independent timelines. Both programs contemplate starting engineering design work on a DEMO around 2030, following the achievement of ITER milestones, and placing the DEMO in operation in the 2030s.

India—The country could begin building a device called SST-2 to develop components for a DEMO around 2027.  India could then start construction of a DEMO in 2037.

Korea—The program plans to build a machine that it calls K-DEMO — a tokamak that would develop components in its first phase, called K-DEMO-1, and then utilize the components in the second phase, or K-DEMO-2. Construction could commence in the mid-to-late 2020s, with operations starting in the mid 2030s.

Russia—Plans call for the development of a fusion neutron source (FNS), a next-step facility that would produce neutrons, the chief form of energy created by fusion reactions, in preparation for a DEMO. The FNS project is part of a Russian commercial development strategy that runs to 2050.

United States—A next-step Fusion Nuclear Science Facility (FNSF) is under consideration. It would be used to investigate materials properties under fusion conditions, and develop components for a DEMO. Construction of the device could start in the 2020s.

Heading the agenda for the first IAEA workshop will be issues ranging from options for materials for fusion facilities to the mission for next-step machines. "These workshops will help us understand the risks of different paths and the costs and benefits," Prager said. "And that really is important for determining the best roadmap."