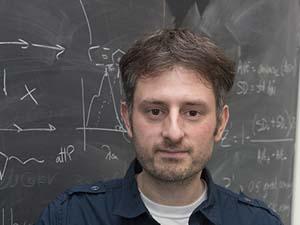 Antibiotic resistance is a growing threat to public health, and the discovery of new classes of these disease-fighting drugs has proved challenging. To address this need, Assistant Professor of Chemistry Mohammad Seyedsayamdost has developed an unconventional approach to identify new antibiotic drug candidates.

Most antibiotics in use today arose out of natural products generated by bacteria and fungi. Penicillin, for example, is a small molecule made by the fungus Penicillium. However, most of the easily identifiable naturally occurring antibiotics have since been discovered, and few new classes have been identified in the last several decades.

The new method developed by Seyedsayamdost can tease out as-yet undiscovered anti-infective compounds. It turns out that several types of bacteria can produce 20 or 30 of these potentially therapeutic molecules, but most of the time the genes that do so are not expressed.

Seyedsayamdost has devised a way to prompt these silent (also known as cryptic) gene clusters to spill their secrets and kick-start the production of the antibiotic-making machinery. In a proof-of-principle study published in the Proceedings of the National Academy of Sciences in April 2014, Seyedsayamdost showed that the technique could be used to uncover novel antibiotic compounds in two silent gene clusters in the  bacterium Burkholderia thailandensis.

His rapid high-throughput method tests tens of thousands of small molecules to see if they are capable of turning on these antibiotic-making pathways. When he finds a small molecule that can activate one of these pathways, he grows the bacteria together with the newly found activator, thereby forcing the bacteria to synthesize the desired small molecule product.

The next step is to collect and purify the resulting compound, determine its molecular structure and test its bioactivity. Not all of the compounds discovered this way will turn out to be true antibiotics, but Seyedsayamdost’s approach increases the odds of finding them by testing gene clusters that, via clues in their DNA sequences, are suspected of playing a role in making drug-like compounds.  High-throughput screens then speed up the process.

“This new high-throughput platform enables the discovery of naturally occurring bioactive molecules and their elicitors — this cannot be achieved by any other method available,” Seyedsayamdost said.