Using atoms cooled to just billionths of a degree above absolute zero, a team led by researchers at Princeton University has discovered an intriguing magnetic behavior that could help explain how high-temperature superconductivity works.

The researchers found that applying a strong magnetic field to these ultracold atoms caused them to line up in an alternating pattern and lean away from each other. The behavior, which researchers call “canted antiferromagnetism,” is consistent with predictions from a decades-old model used to understand how superconductivity arises in certain materials. The results were published Sept. 29 in the journal Science.

“No one has observed this type of behavior in this system before,” said Waseem Bakr, an assistant professor of physics at Princeton. “We used lasers to create artificial crystals and then explored what is happening in microscopic detail, which is something you just cannot do in an everyday material.” 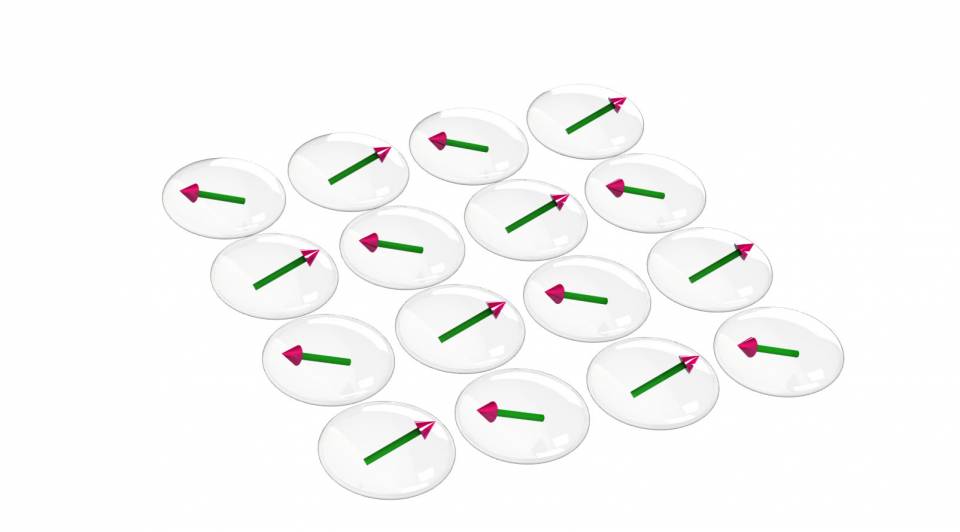 The experiment, conducted on a tabletop in Princeton’s Jadwin Hall, enables the exploration of a model describing how quantum behaviors give rise to superconductivity, a state where current can flow without resistance and which is prized for electricity transmission and making powerful electromagnets. While the basis of conventional superconductivity is understood, researchers are still exploring the theory of high-temperature superconductivity in copper-based materials called cuprates.

Due to the complexity of cuprates, it is difficult for researchers to study them directly to find out what properties lead to the ability to conduct current without resistance. Instead, by building a synthetic crystal using lasers and ultracold atoms, the researchers can ask questions that are otherwise impossible to address.

Bakr and his team cooled lithium atoms to just a few ten-billionths of a degree above absolute zero, a temperature where the atoms follow the laws of quantum physics. The researchers used lasers to create a grid to trap the ultracold atoms in place. The grid, known as an optical lattice, can be thought of as a virtual egg tray created entirely from laser light in which atoms can hop from one well to the next.

The team used the setup to look at the interactions between single atoms, which can behave in a manner analogous to tiny magnets due to a quantum property called spin. The spin of each atom can orient either up or down. If two atoms land on the same site, they experience a strong repulsive interaction and spread out so that there is only one atom in each well. Atoms in neighboring wells of the egg tray tend to have their spins aligned opposite to each other.

This effect, called antiferromagnetism, happens at very low temperatures due to the quantum nature of the cold system. When the two types of spin populations are roughly equal, the spins can rotate in any direction as long as neighboring spins remain anti-aligned.

When the researchers applied a strong magnetic field to the atoms, they saw something curious. Using a high-resolution microscope that can image individual atoms on the lattice sites, the Princeton team studied the change in the magnetic correlations of the atoms with the strength of the field. In the presence of a large field, neighboring spins remained anti-aligned but oriented themselves in a plane at a right angle to the field. Taking a closer look, the researchers saw that the oppositely aligned atoms canted slightly in the direction of the field so that the magnets were still opposite facing but were not precisely aligned in the flat plane.

Spin correlations had been observed last year in experiments at Harvard University, the Massachusetts Institute of Technology and Ludwig Maximilian University of Munich. But the Princeton study is the first to apply a strong field to the atoms and observe the canted antiferromagnet. 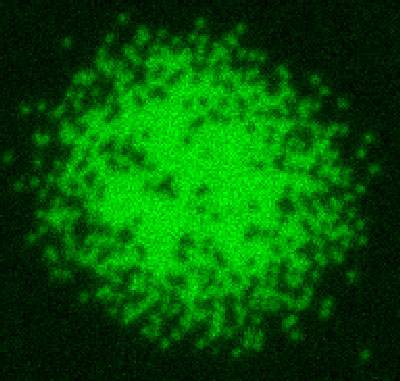 The observations were predicted by the Fermi-Hubbard model, created to explain how cuprates could be superconducting at relatively high temperatures. The Fermi-Hubbard model was developed by Philip Anderson, Princeton’s Joseph Henry Professor of Physics, Emeritus, who won a Nobel Prize in Physics in 1977 for his work on theoretical investigations of electronic structure of magnetic and disordered systems.

The study also looked at what would happen if some of the atoms in the egg tray were removed, introducing holes in the grid. The researchers found that when the magnetic field was applied, the response agreed with measurements done on cuprates. “This is more evidence that the proposed Fermi-Hubbard model is probably the correct model to describe what we see in the materials,” Bakr said.

The Princeton team included graduate student Peter Brown, who conducted many of the experiments and is the paper’s first author. Additional contributions to the experiments came from Debayan Mitra and Elmer Guardado-Sanchez, both graduate students in physics, Peter Schauss, an associate research scholar in physics, and Stanimir Kondov, a former postdoctoral researcher who is now at Columbia University.