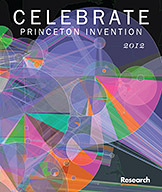 Princeton-led discoveries show up not only on the pages of scientific journals — they are also on the shelves of major retailers. At the Celebrate Princeton Invention reception Nov. 29, the University honored its faculty, staff and student inventors for their role in technology transfer — which includes patenting and licensing of inventions — to bring research innovations to the marketplace.

The featured inventions included Princeton technologies in various stages of development, from prototypes to finished products such as those presented by Vorbeck Materials, a company that manufactures graphene-based printable electronics using intellectual property licensed from the University. 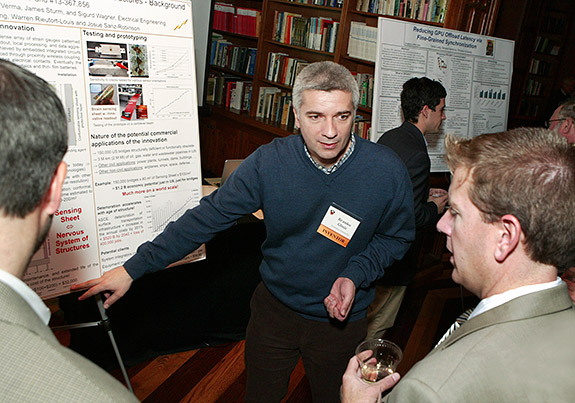 Celebrate Princeton Invention, now in its fourth year, attracted representatives from investment capital firms, the entrepreneurial community and technology companies to displays and a reception at the Chancellor Green Rotunda.

Early-stage innovations on display included: a sensor system for detecting cracks in bridges that could prevent collapses; an inexpensive replacement for platinum in manufacturing; a system that researchers can use to turn genes on and off; an efficient method for computer processing units to talk to each other; new materials for harnessing energy from sunlight; and a sensor that can detect poisonous gases from a distance. 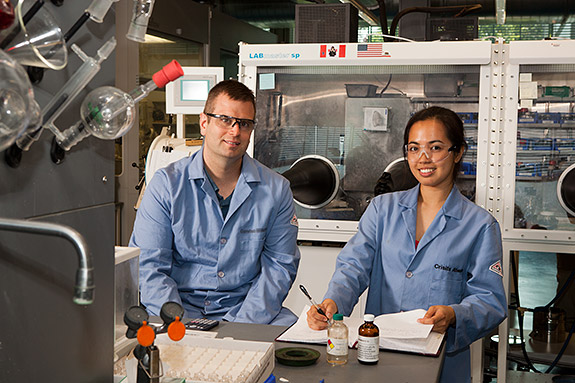 "These discoveries are the future of innovation in the country, and at Princeton we are committed to technology transfer and working with our partners in industry to develop University inventions so they can benefit society," said Dean for Research A.J. Stewart Smith, who is also the Class of 1909 Professor of Physics.

"At Princeton we pride ourselves on streamlining the disclosure and licensing process for our faculty researchers as well as our industrial and investment partners," said John Ritter, director of Princeton's Office of Technology Licensing.

Keynote speaker John Lettow, a member of the Class of 1995 and president of Vorbeck Materials, spoke favorably of working with Princeton to license and develop technologies invented in the laboratory of two Princeton professors of chemical and biological engineering, Ilhan Aksay and Robert Prud'homme.

"There is a unique quality to the technology licensing department here, a flexibility that was beneficial both for Princeton and for us as a small company," said Lettow. He also praised the high caliber of Princeton research and the importance that the University places on having world-renowned faculty work directly with undergraduates and graduate students.

Another factor in Vorbeck's success, said Lettow, was the continued involvement of Aksay in an advisory role as the company moved Aksay's technologies for the production of graphene, a novel carbon-based material with excellent electrical conductivity, toward commercialization.

Vorbeck's technology can be found in tamper-proof packaging used by major retailers to discourage product theft. The company creates very thin electronic circuits by printing graphene liquid (ink) onto a surface. Vorbeck has teamed with packaging manufacturer MeadWestvaco to create an electronic sensor web that is sandwiched between layers of cardboard in retail product packaging. If the item is broken into or the product removed from the package, the electronic circuit activates an on-package alarm.

The ink is one of several applications — including longer lasting batteries — that Vorbeck is developing for graphene, which has unique electrical and thermal properties. According to Lettow, Vorbeck is the first company in the world to have a product based on graphene, a novel material that is exciting interest in the electronics industry and was the subject of the 2010 Nobel Prize in physics. 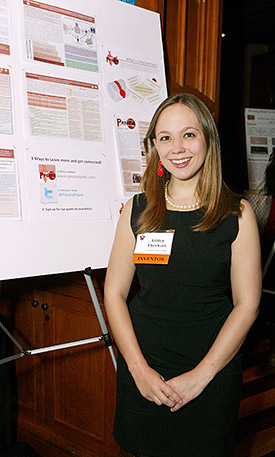 Novel research ideas are in great demand, especially in a changing world, said guest speaker Ralph Izzo, chairman and chief executive officer of PSEG, the parent company of the utility group Public Service Gas and Electric (PSE&G). Referring to Hurricane Sandy, which hit the Eastern United States on Oct. 29,  Izzo said that PSE&G coped with unprecedented challenges to its electrical supply and distribution system. "If this is the 'new normal,' then we need to completely reinvent the way we manage the system," he said. "I picked up a couple of new ideas while I was here tonight."

Izzo, who prefaced his comments by asking if anyone in the room was still without power a month after the storm, said that needed technologies include new methods for distributed generation of electricity, improvements in solar energy efficiency, cost-effective ways to store electricity and sensors that can detect customer outages. Prior to becoming an executive, Izzo worked as a postdoctoral researcher at the Princeton Plasma Physics Laboratory.

PSEG is a charter member of Princeton's Energy and Environment Corporate Affiliates Program, which supports research that addresses global energy needs and environmental concerns and is organized by the Andlinger Center for Energy and the Environment, the Princeton Environmental Institute, the School of Architecture, and the Woodrow Wilson School of Public and International Affairs. 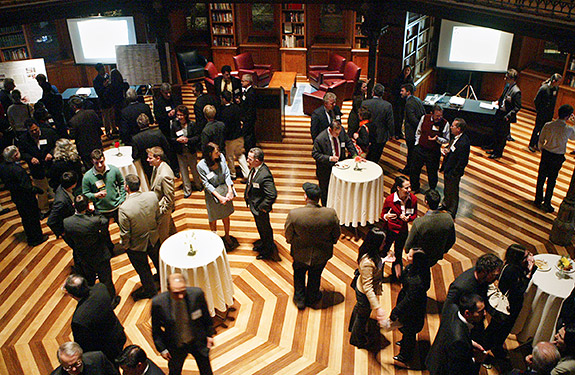 Among this year's featured technologies:

"Intellectual property is the future of innovation," said Smith. "We have to nourish it, support it, encourage it and protect it, because it if it is not protected, it is no use to anybody." Patents encourage innovation, Smith added, because they provide companies with the ability to develop technologies without fear that competitors will develop a similar device or application.

The event, organized by the Office of the Dean for Research, was sponsored by a donation by the law firm of McCarter & English. Support for the research at Princeton comes primarily from federal sponsors and also foundations and corporations.