Senior Alex Smith described his internship in South Africa as a researcher in health policy and economics as "transformative." Visiting graduate student Kelebogile Mpho of Botswana said she looked forward to bringing what she learned at Princeton back to her home country. And astrophysics faculty member Michael Strauss called sending students to visit collaborators in Japan a "fantastic opportunity."

The three were speaking at a seminar to celebrate the first year of a partnership to support international scholarship and programs at Princeton University funded by Banco Santander, the multinational banking institution and parent company of Sovereign Bank. 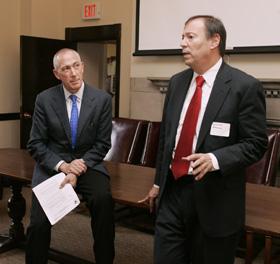 "We are very proud of the partnership we have established with Princeton University," said Eduardo Garrido, director of Santander Universities Global Division. "Higher education is the engine to foster innovation and progress throughout the world," he said.

"Princeton's emphasis is on opening the University to the world and growing a global community of scholars," said Jeremy Adelman, Princeton's Walter Samuel Carpenter III Professor in Spanish Civilization and Culture and director of the Council for International Teaching and Research. "Through the generosity of Santander we are able to extend our programs to a greater number of students and faculty both at Princeton and other institutions."

One of these international programs is Princeton's Global Collaborative Network program, which fosters collaborations between Princeton and leading scholars and institutions around the world.  Michael Strauss, a professor of astrophysics, heads a network including colleagues in Taiwan, Brazil, France and Japan to add new instrumentation to the Subaru telescope in Hawaii to survey the universe and unlock the secrets of dark matter and dark energy. Citing the Santander program's role in funding travel to Japan, Strauss said, "This has been a fantastic opportunity for our students." 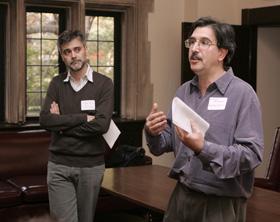 Another Global Collaborative Network focuses on exploring race and citizenship in two post-slavery societies, Brazil and the United States. Led by Pedro Meira Monteiro, associate professor of Spanish and Portuguese languages and cultures, and João Biehl, the Susan Dod Brown Professor of Anthropology, the Network includes seminars taught both at Princeton and the University of São Paulo. "The Santander funds have made it possible for students to come from Brazil to Princeton, and for our students to go to Brazil," Meira Monteiro said.

In addition to funding collaborative networks, the Santander support has enabled the expansion of study-abroad and other programs for students, including an intensive summer Portuguese language program in Brazil, said Nancy Kanach, director of the Office of International Partnerships and senior associate dean of the college. "This has been a wonderful opportunity for us," Kanach said, "because we've been able to expand our opportunities to a greater number of students." 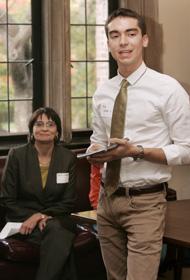 Alex Smith, a senior, is one of the students who benefited from an international internship. Smith, who called his experience "transformative," conducted public health and health economics research in South Africa, working to evaluate the benefits of health policies. He is applying what he learned in South Africa to his senior thesis research on the rural health system in Iran.

For Lelabari Giwa-Ojuri, a junior who studied Arabic and lived with a family in Amman, Jordan, the experience was a way to learn things that just couldn't be learned at home, such as the differences between spoken and written Arabic. "I value experiential learning and the opportunity to step out of the classroom," she said.

The Santander partnership also enabled Princeton to expand its offering of international summer courses, known as Global Seminars, said Mark Beissinger, professor of politics and director of the Princeton Institute for International and Regional Studies (PIIRS).

Taught by Princeton faculty, Global Seminars allow students to study in a country setting relevant to the subject that they are studying. For example, a course on the history of the Vietnam War was conducted in Hanoi. "The students learn about events that one can only know about by seeing those sites and experiencing what it is like in those locations," Beissinger said. The Global Seminar also involves learning a language and engaging in service activities, and for many students, Beissinger said, it is their first exposure to living abroad.

Santander funds have enabled the University to supplement the costs of the Global Seminars for students and provide financial assistance to students unable to afford the courses, Beissinger said. 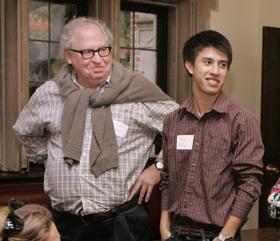 One such seminar was led last summer by Bruno Carvalho, an assistant professor of Spanish and Portuguese languages and cultures, in Rio de Janeiro. The Brazilian-born Carvalho guided students in an exploration of the role the city of Rio has played in how Brazilians see themselves and how the world views Brazil. The students attended cultural attractions and met with politicians, historians, sociologists and other scholars in Brazil.

Michael Cadden, chair of Princeton's Lewis Center for the Arts and a senior lecturer in theater, brought a group of students last summer to Greece for six weeks of reading plays, learning Greek, and immersion into daily life in Athens and Epidauros. With Timothy Vasen, a lecturer in theater and the Lewis Center for the Arts and director of Princeton's Program in Theater, the students explored the political nature of ancient Greek playwrights through first-hand experiences. "We didn't just study these works – we acted them out," said Kanoa Mulling, Class of 2015, who attended the seminar. "We put our bodies on the line." He added, "I began to pay attention to theory in a whole new way." 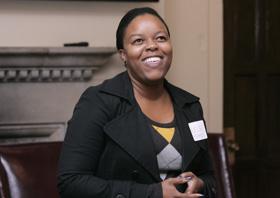 Kelebogile Mpho, a graduate student inEcology at the University of Botswana, came to Princeton to conduct research on how nutrient levels in wetland plants and soils are affected by flooding. "I never expected to find myself at Princeton University," said Mpho, who will defend her thesis this year. "I have learned so many things that I will bring back to my country."

Banco Santander, based in Madrid, Spain has more than 120 million customers in 15,000 branches worldwide and roughly 730 Sovereign Bank branches located in the northeastern United States. The gift to Princeton is supported by the company's Santander Universities Global Division, which has forged long-term partnerships with more than 1000 universities around the world.