What makes a tumor switch from dormant to malignant?

Cancer constantly wages war on the human body. Battles are won, lost or sometimes end in a stalemate. This stalemate, known as tumor dormancy, is extremely difficult to study in both cellular and animal models.

A new computational model developed in the laboratory of Salvatore Torquato, a professor of chemistry at Princeton University, offers a way to probe the conditions surrounding tumor dormancy and the switch to a malignant state. Published Oct. 16 in the journal "PLOS ONE," the so-called cellular automaton model simulated various scenarios of tumor growth leading to tumor dormancy or proliferation. 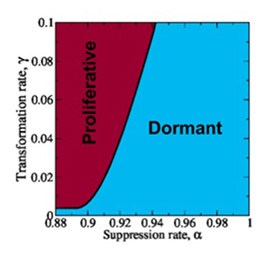 "The power of the model is that it lets people test medically realistic scenarios," said Torquato, who is also affiliated with the Princeton Institute for the Science and Technology of Materials. In future collaborations, these scenarios could be engineered in laboratory experiments and the observed outcomes could be used to calibrate the model.

For each scenario, a set of rules is imposed on the virtual cell population. Rules are possible interactions, such as neighboring cell death or immune system suppression, that dictate cell division through probabilities derived from past experimental data. Once the researchers programmed the rules, they watched as the simulated competition unfolded between the tumor and the environmental factors that may suppress its growth.

"We were very surprised to observe this phenomena where the tumor all of a sudden began to rapidly divide," said Duyu Chen, graduate student in the Torquato lab and lead author on the article. This was the first time that the emergent switch behavior, which has been observed clinically, occurred spontaneously in a model, Chen said.

The researchers evaluated a number of factors that could affect tumor cell growth including spontaneous cell mutations, mechanical properties, and the rate and strength of suppression factors such as the immune system. One of the model's findings was the likely suppression of tumors in harsh environments, characterized by high density and pressure.

"The way [the researchers] built their model system is that the dormancy state is not one of cells simply sleeping, in fact it's an active state, it's just that the whole system is held in equilibrium or stalemate," said Micheal Espey, program manager at the National Cancer Institute who was not involved in the research. "That's a very interesting viewpoint."

The research team also predicted that if the number of actively dividing cells within the proliferative rim reached a certain critical level, the tumor was very likely to begin growing rapidly. This result could provide insight into early cancer treatment, Chen said.

Through repeated simulations the research team constructed a phase diagram that revealed the boundary between a dormant and proliferative state. If experimental data was incorporated into the model, Espey said, researchers could predict when the tumor was in a dormant state and when it was heading toward a proliferative state. "That's the value," he said.

The research was supported by the National Cancer Institute under Award No. U54CA143803.